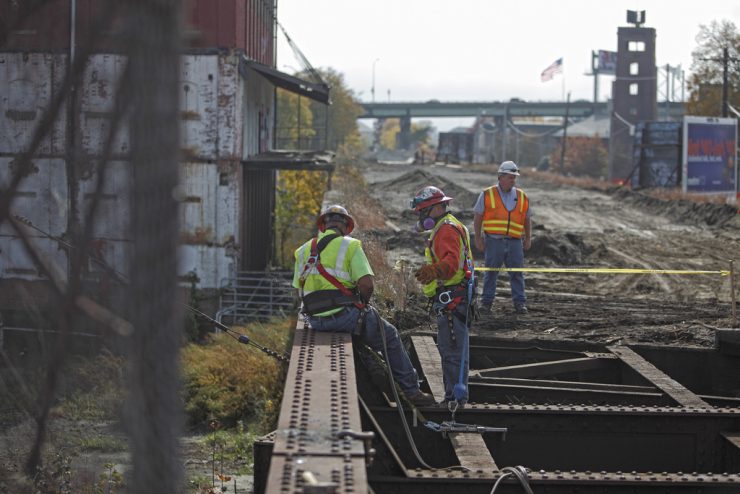 Building on the Patrick-Murray Administration’s record of commitment to the South Coast, the plan includes funding for the completion of the South Coast Rail Line with diesel-fueled commuter trains to connect Boston to Fall River and New Bedford. The $1.8 billion investment will result in greater mobility for South Coast residents and less congestion on Route 24. The project is expected to create 3,800 jobs and generate $500 million in new economic activity statewide annually.

The plan will also include a $5.4 million increase in funding for the Southeastern Regional Transit Authority (SRTA) in FY14. The South Coast investments in the plan, including interchange improvements at Routes 24 and 140 in Taunton, improvements to Route 6 and Fauce Corner Road in Dartmouth and reconstruction of Route 18 from Cove Street to Griffin Court in New Bedford, are designed to ensure regional transportation equity, create jobs and expand economic opportunity.

The plan addresses systemic budget deficits at the MBTA, MassDOT and the 15 Regional Transit Authorities, much of which has been caused by the debt burden related to the Central Artery.

Regional Transit Authorities — $100 million in FY14; $1.1 billion over 10 years
This additional investment will allow the RTA’s to end the practice of borrowing, with interest costs, to fund annual operating costs by instead forward-funding each agency. Beginning in FY15, the additional $100 million will be used to expand RTA service by adding hours of operation, increasing frequency on existing routes and adding new service.

MBTA – $166 million in FY14; $3.2 billion over 10 years
This new investment will allow the MBTA to close its current and projected budget deficits, much of which is caused by the debt burden related to the Central Artery public transit commitments. Beginning in FY2014, $25 million in annual operating funds will also be available to provide modest service enhancements such as possibly expanding evening hours, restoring weekend service in areas that have been cut and improved customer service.

Improvements to SRTA and the construction of South Coast rail are certainly good for New Bedford and Fall River, but it does not address the fact that those cities are in Providence’s metro area and the Commonwealth and Rhode Island continue to fail to have a regional transportation plan across the state border that splits Providence’s metro.

Photo by Eric Rice from Flickr Ted Nesi reports for Providence Business News about how Massachusetts State Treasurer Timothy Cahill and Governor Deval Patrick are not seeing eye to eye on funding for restoration of...