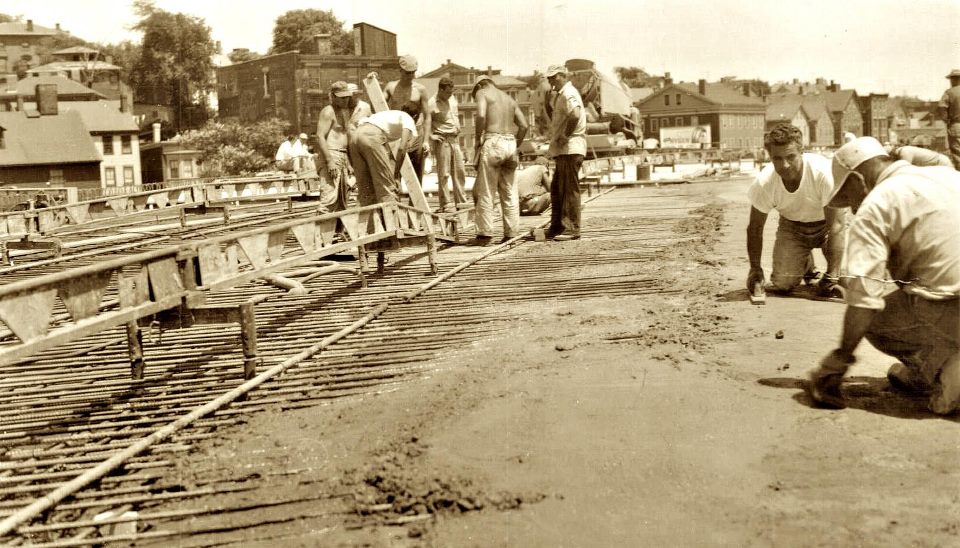 From the Governor’s Office:

Providence, RI – Governor Lincoln D. Chafee joined members of Rhode Island’s Congressional Delegation, General Assembly members, state and City of Providence officials, and private sector leaders today to break ground on the next phase of the I-195 relocation project. Infrastructure work has now begun in the footprint of the former I-195 to rebuild the surrounding city streets.

“The work taking place now is a fundamental step toward the responsible, job-generating development of this valuable land, which holds a tremendous potential for economic development here in the capital city,” Governor Chafee said. “By upgrading our infrastructure around these properties, we can attract leaders in high-growth industries to create good jobs here in Rhode Island.”

The $13 million contract with the Cardi Corporation will focus on roadways west of the Providence River. Work will begin with underground utilities, and move on to the streets as spring and summer progress. The goal is to create a more efficient configuration for all modes of transportation, from cars to bikes to pedestrians. Final completion is anticipated in 2014.

“Today marks a significant step forward in the I-195 Commission’s efforts to realize the highest and best use of these parcels of land,” said Chairman Colin P. Kane. “The groundbreaking represents a nearly $50 million investment by the federal government, state, City government and the utility providers to truly create a dynamic Knowledge District reconnected by new city streets, sidewalks, enhanced infrastructure, pedestrian and bicycle paths, and public parks. All great places are built on strong foundations, and today kicks off the beginning of this foundation. The Commission, working with its partners in the state and City of Providence, together offer a platform for job creation and a flywheel of economic development.”

“We ask that the residents bear with us and be patient while we complete this important work,” Rhode Island Department of Transportation (RIDOT) Director Michael P. Lewis said. “The result will be an alignment that will better support the city with improved access to the new highway and the neighborhoods nearby.”

“This is a positive step forward in redeveloping this valuable land to spur economic activity and create jobs here in Providence,” said Senator Jack Reed, a member of the Appropriations transportation subcommittee who helped secure federal funds for the project.

“Infrastructure investments improve our communities while also creating badly needed jobs,” said Senator Sheldon Whitehouse. “I’m proud to help announce the next phase of this important project in Providence, and I will continue working to secure additional federal funding for similar projects throughout the state.”

“Rebuilding Rhode Island’s infrastructure is critical to our work of rebuilding Rhode Island’s economy and creating good-paying jobs for working families,” said Congressman David Cicilline. “I was delighted to take part in today’s groundbreaking ceremony, and I will continue to support projects like this and will continue to work with the rest of our delegation to secure significant federal resources for local infrastructure investments.”

Rhode Island House Speaker Gordon Fox said, “Today marks another important step toward the goal of providing opportunities for great economic growth for our state and our capital city. The House is working in partnership with the Senate, Governor Chafee and Mayor Taveras to build a brighter future through development of this critical 195 land.”

Rhode Island Senate Majority Leader Dominick J. Ruggerio said, “The availability of this prime real estate presents a tremendous economic development opportunity for our city and state. Today’s groundbreaking means immediate jobs for the construction industry, one of the industries hit hardest in the recession. Before long, it will mean permanent jobs in the cutting edge and emerging fields of healthcare, science and technology.”

“The I-195 land represents a once-in-a-generation opportunity to reshape Providence’s landscape and develop our city’s knowledge district into a regional hub of academic, entrepreneurial and research activity. Today we celebrate as work begins to put shovels in the ground, create jobs and grow Rhode Island’s economy,” said Providence Mayor Angel Taveras.

RIDOT began the demolition of the old highway in 2010, removing more than 3,500 feet of the old highway, which was built in the late 1950s and officially closed in late 2009. Another 1,500 feet of old highway was taken down through other contracts associated with the I-195 relocation. The project has changed the landscape of Providence and addressed a wide range of issues, including safety, aging infrastructure, traffic congestion and economic development.

The relocation of I-195 opens up about 35 acres of land, with 20 acres set for new businesses along the waterfront and the remainder for roads, parks, and public spaces. A vote could be held as early as April 8 to transfer the land from the City of Providence to the I-195 Redevelopment District Commission, which was created in 2011 to market and sell the surplus land for future economic development.

The next contract, which will reconstruct roads east of the Providence River in the area of the old highway corridor, is expected to begin later this summer. Much like the west side contract, this work will focus on building new streets and repairing old ones, including important thoroughfares such as Wickenden Street, South Main Street, and South Water Street. Final work on the second contract will extend into 2015.

Motorists with questions can contact RIDOT’s Customer Service office at 401-222-2450 weekdays from 7:30 a.m. to 4 p.m. Additional information can be found on RIDOT’s social media sites Twitter and Facebook.