The Observer objects to Citi Bike not because the bikes are hideous or dangerous—the editors mention, but shrug off, the possibility of “accidents involving goofy tourists,” which for many New Yorkers is a plus—but because of… socialism. Yes! Citi Bike “represents another governmental incursion into the private marketplace.”

Okay, but. This is 180 degrees wrong. It is exactly backwards. Citi Bike, run by Alta Bicycle Share, is a for-profit business, and functions as a massive marketing campaign for Citi Bank .

Up and down the coast of New York and New Jersey, property owners are being forced to raise their homes and businesses above a new 100-year floodplain drawn up and mandated by the Federal Emergency Management Agency. In the five boroughs, elevating multistory buildings present a particular problem.

If buildings must be raised five, eight, even 12 feet up on stilts, planners fear it could deaden New York’s vibrant street life along coastal areas. In other words, will Jane Jacobs float?

Bill Peduto envisions Downtown Pittsburgh as a “mini-Manhattan” — one that hardly ever sleeps — with more housing, unique local retailers and even a free bus loop system to chauffeur riders from one destination to the next.

But Mr. Peduto’s vision also includes an expanded role for Allegheny County in financing the kind of big ticket development, from skyscrapers to office-to-residential conversions, that have already helped fuel the resurgence of the city center.

While the Democratic mayoral nominee is all for a vibrant Golden Triangle, he argues the city should not have to shoulder the burden when it comes to dispensing limited public funds for development. The county should be stepping up to the plate as well.

“Downtown is the region’s living room, not just the city’s,” he said.

Commissioners on Tuesday are supposed to decide the boundaries for a special assessment district that will raise $20.6 million for the $142.6 million downtown electric rail system that’s expected to start operation in 2016.

I’m not saying an assessment is the best way to pay for a Providence Streetcar (I’m also not saying it is not), but if Fort Lauderdale gets a streetcar before us, my brain will likely explode.

New York Magazine: Why Conservatives Hate Citi Bike So Much, in One Venn Diagram

What is it about bike shares that so enrages conservatives? They’re just bikes! That people share! And yet the New York Post has a new story every day about the endless disasters that Citi Bike has brought upon the helpless populace of New York. (Problems at a bike station delayed a person for five minutes! That never happens with the subway!) Dorothy Rabinowitz of The Wall Street Journal called the Bloomberg administration “totalitarian” for … encouraging the riding of bikes, we guess. In perhaps the best unhinged rant of any kind ever, Daniel Greenfield at the always enjoyable FrontPage Magazine refers to Janette Sadik-Khan, the city’s pro-bike transportation chief, as a “Muslim Nazi collaborator’s granddaughter” who in “partial revenge … made many New York streets nearly as impassable as those of her grandfather’s wartime Dresden.” 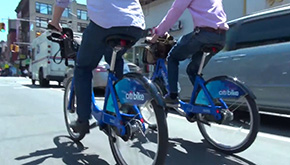