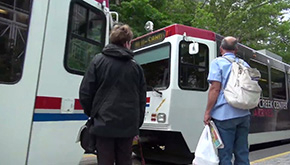 According to Congress for New Urbanism President John Norquist, the Salt Lake City area has the fastest growing rail system in America. And as Streetsblog’s Angie Schmitt pointed out last month, “It’s the only city in the country building light rail, bus rapid transit, streetcars and commuter rail at the same
time.”