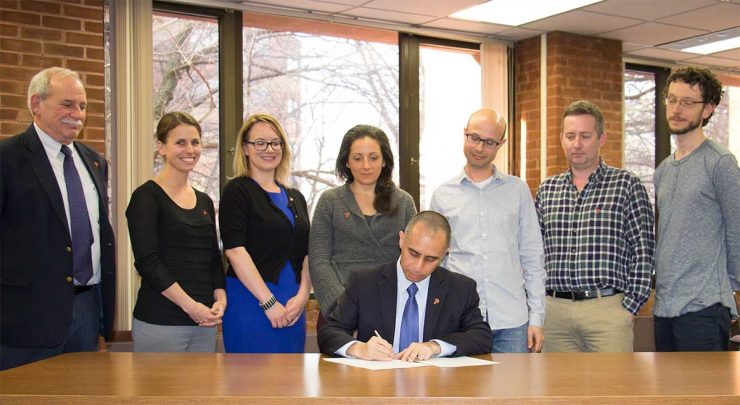 PROVIDENCE, RI – Providence Mayor Jorge Elorza today announced an effort to revamp the City’s Bicycle and Pedestrian Advisory Commission (BPAC) by signing an executive order granting the commission more say over where bicycle and pedestrian infrastructure investments, such as crosswalks and bike lanes, are implemented and how they are designed.

“Having safe areas for pedestrians and bicyclists are one of the keys to having the fittest city in the country,” said Mayor Elorza. “I am looking forward to hearing input from the commission to ensure safety for all that walk and ride.”

Under the executive order, most major street and sidewalk repair or construction projects within Providence will come before the Providence BPAC for review at two points during their conception and design phases.

“By signing this order, Mayor Elorza sets Providence on track to become an even better place for walking and biking,” said Eric Weis, Chairman of BPAC. “Whether to school or work, or for exercise and recreation, when we travel on foot or by bike we positively impact public health, happiness, and our economy. The growth of this commission in scope and size means it will be better able to represent all Providence residents, and better serve the city as a whole.”

This new process will give the members of the Commission a greater say in how the Capital City’s streets are shaped moving forward and will also provide the public with an important opportunity to provide input on these decisions.

“This is a huge step forward for bikeability in Providence. How to make streets safe and comfortable for all road users must be discussed earlier in the design process,” said Alex Krogh-Grabbe, Executive Director of RI Bicycle Coalition. “The Coalition is excited about the progress in Providence and can’t wait to see what Mayor Elorza does next.”

The executive order was announced and signed into place at an event to kick-off an update to Providence’s Bicycle Master Plan.

[box type=”download”]Download a copy of the Executive Order [/alert] [box type=”note”]Full disclosure: I am a member of the Providence Bicycle and Pedestrian Advisory Commission.[/alert]

BPAC seeks public comment on needed improvements to bicycle lanes and other bicycle infrastructure throughout Providence.

The Bicycle and Pedestrian Advisory Commission recently sent a letter to Mayor Elorza advising that our city phase out use of pedestrian crossing push buttons (aka beg buttons) citywide, with a special focus on school...