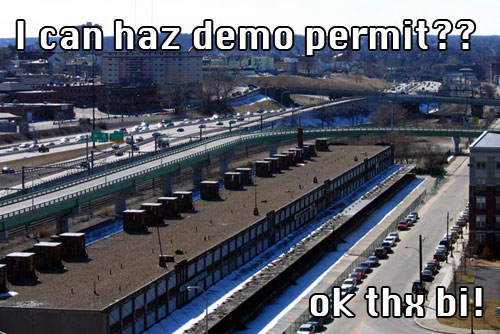 Read today’s article from The Providence Journal and prepare for your brain to explode.

Some choice nuggets from the article:

Carpionato had agreed to buy the warehouse from the state for $4.3 million in 2005, a price $10 million below what the state paid for it only seven years before.

State officials and preservation advocates say that Carpionato was allowed to buy it at such a low price only because it was sold with the understanding that it would not be demolished.

When the state sold the building to Carpionato, a preservation easement was to be included, contractually protecting the building against destruction. For reasons no one can explain, that key provision was “mysteriously absent” from the final agreement, according to Vicki Veh, interim head of the Providence Preservation Society.

Oopsie! The bankrupt state of Rhode Island sold the property at a rock bottom price and forgot to include the preservation clause. Silly state!

Read on about the usual back and forth between city officials and preservationist about the definition of “unsafe.”

I’m not even going to get into the typical nonsense from former mayor Pavalino in the article.

J. from ArtInRuins posted this rather prescient missive on UrbanPlanet a couple days ago:

I have more thoughts about all this, but only have the time/energy for this snarky missive at this point.

A proposal by the Carpionato Group for 776 parking spaces and 459 residential units at 100 Harris Avenue (aka the Old Fruit and Produce Warehouse) is on the City Plan Commission Agenda for their meeting on December 20th.

From ProJo 7to7 Daily News Blog Judge says developer can demolish historic food terminal PROVIDENCE – A judge has ruled that Carpionato Properties can knock down the food and produce terminal on Harris Avenue...