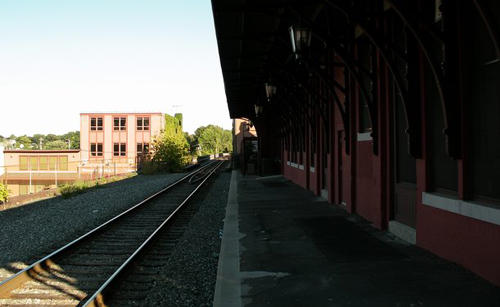 There’s been chatter about passenger service from Providence to Woonsocket and perhaps on to Worcester for a while (maybe since service was suspended in 1960). It may be true that many of us here in Providence have no need to go to Woonsocket, but in a healthy metropolitan environment, people from Woonsocket and points between here and there would certainly want to be coming to Providence for work and recreation.

The current administration in Washington would probably rather give us money to add four or five lanes to Route 146 before providing funds for commuter rail service, however one way or another we’ll have a new administration in Washington in about 13 months. So the time to plan for rail service is now, and that is what the City of Woonsocket is doing.

Rhode Island is the most urban state in the country, we are a small state with limited land and limited resources. It is a no-brainer that we should be expanding public transit options to move people around the state and relieve congestion on our state’s (crumbling) roads.

Potentially, Woonsocket service could continue south through Providence to the new station at T.F. Green airport, supplementing MBTA service to that station.