The economy may be souring, but there are still a few projects underway in Providence. Monday I hit the streets and took some photos of three of them, the new Blue Cross Blue Shield Headquarters in Capital Center, the Capitol Cove project also in Capital Center, and the Hampton Inn project at the St. Francis Chapel on Weybosset Street.

First up, the Blue Cross Blue Shield headquarters. BCBS is moving all of it’s operations into this new building in Capital Center, consolidating all of it’s staff under one roof for the first time. The 13 story building will be mostly glass and several feet taller than the tallest of the neighboring Waterplace condo towers. 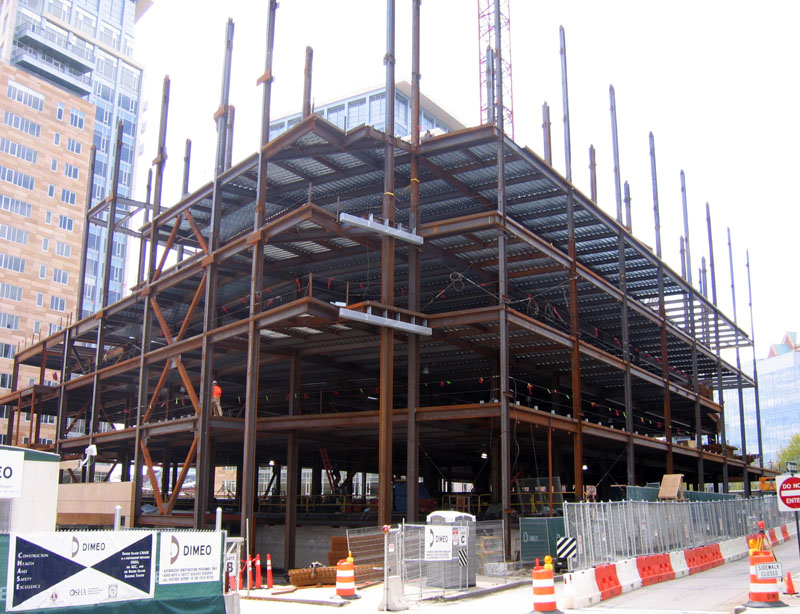 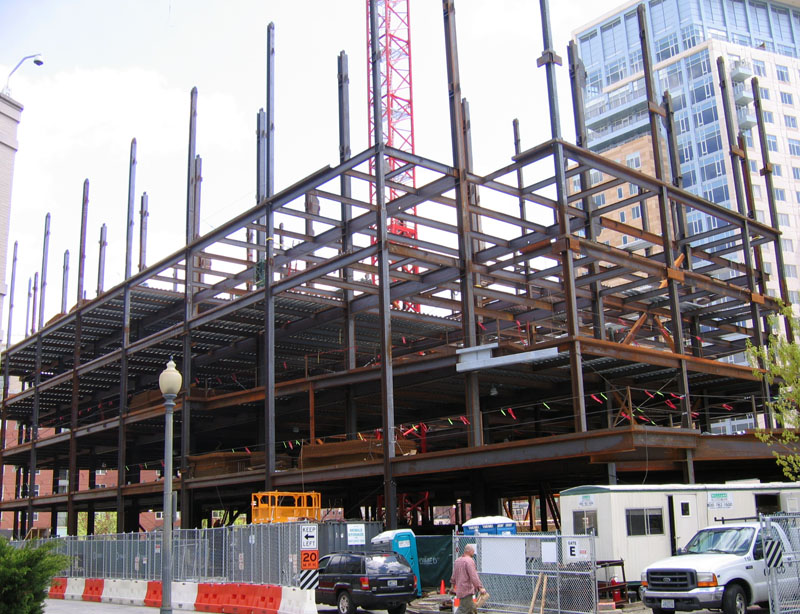 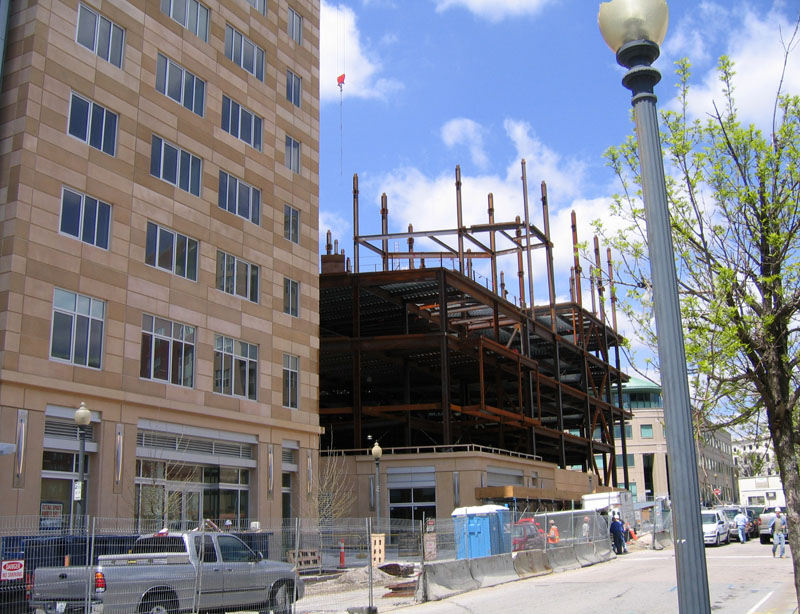 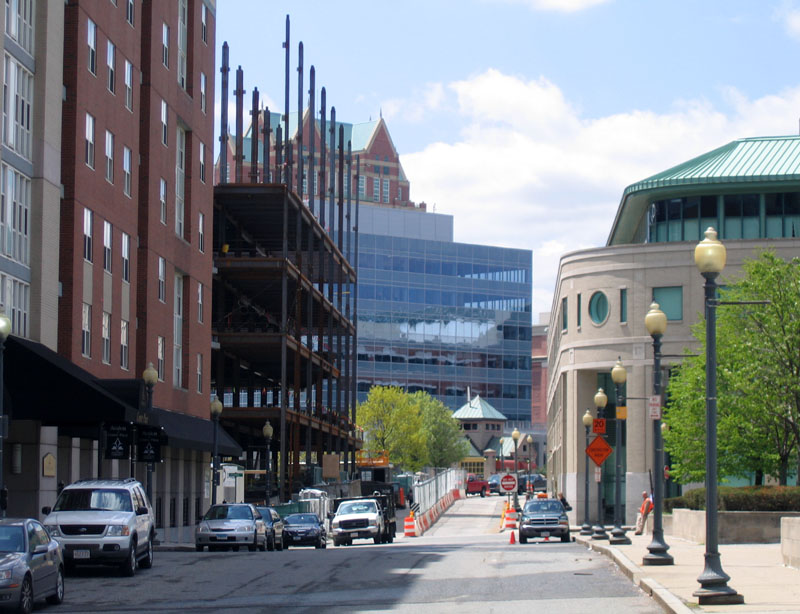 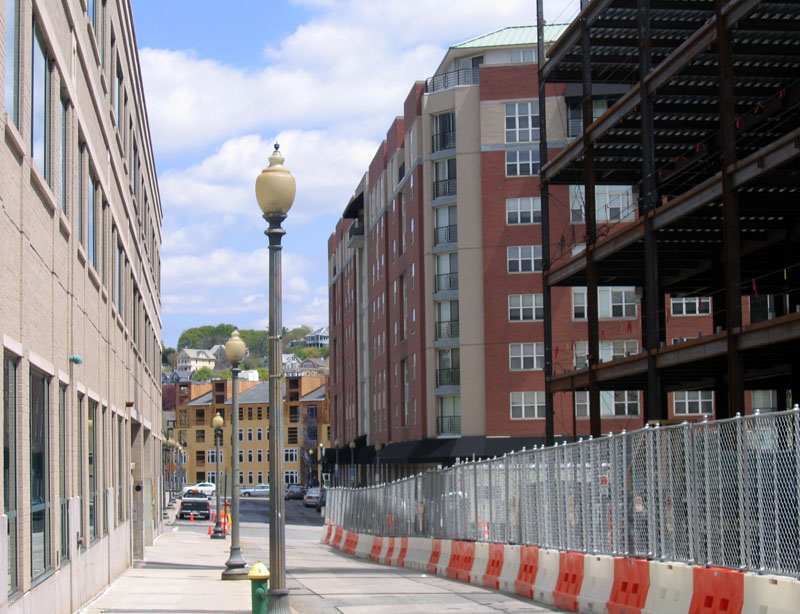 Note how Finance Way is becoming a true urban street with buildings on either side. Though I loathe the name “Finance Way.” I say we change the name to “Capital Center Avenue,” who’s with me? 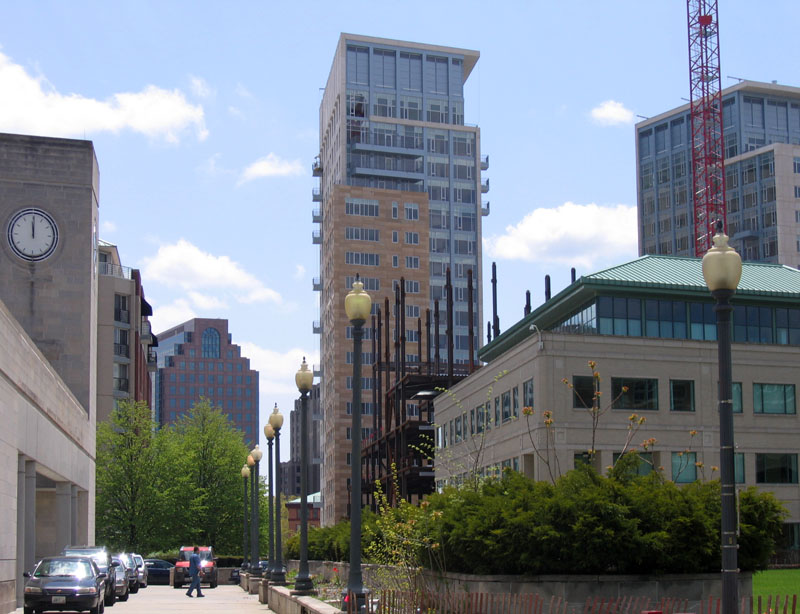 Next up, Capitol Cove.

Capitol Cove is phase one of a multi-phase housing project. Phase one includes 96 units with parking beneath the building. I would assume we’ll need to wait for the housing market to improve before we see subsequent phases. This phase sits right up against the Moshassuck River along Canal Street. As part of this phase we will see an extension of the riverwalk from Park Row to Smith Street.

I didn’t catch a photo of it, but this project creates a nice forth wall for the Roger Williams Memorial Park. Instead of having one side of the park fronting a windswept surface lot, we now have the city surrounding the park. Unfortunately Canal Street remains a traffic sewer, that street needs a diet. A traffic signal at Canal and Park Row would facilitate pedestrian crossings from the park to Capitol Center. 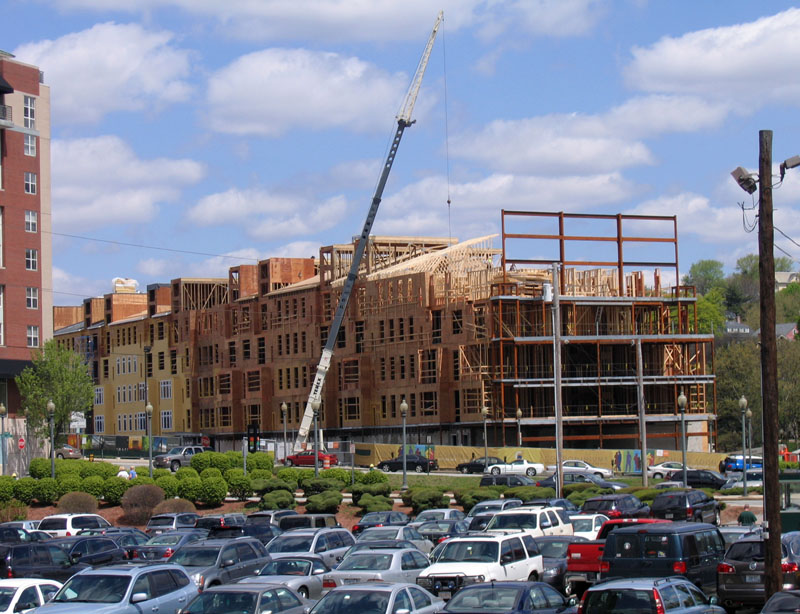 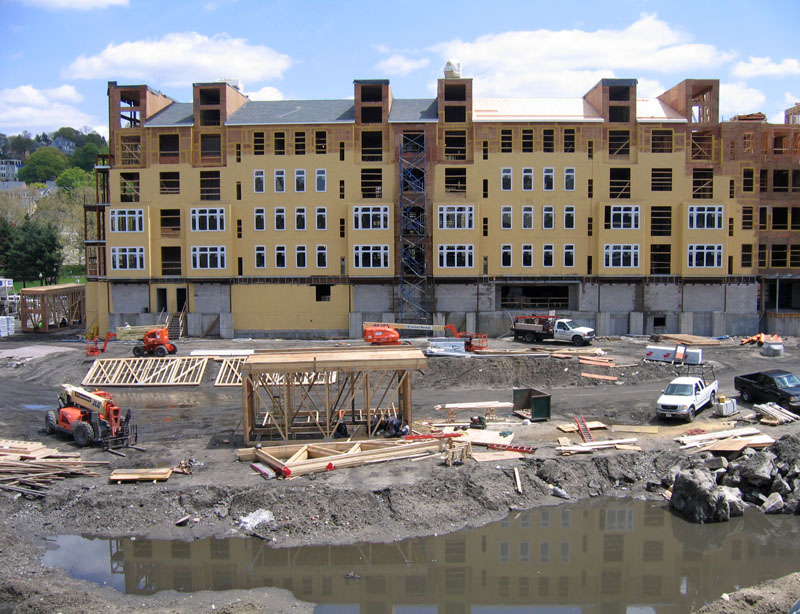 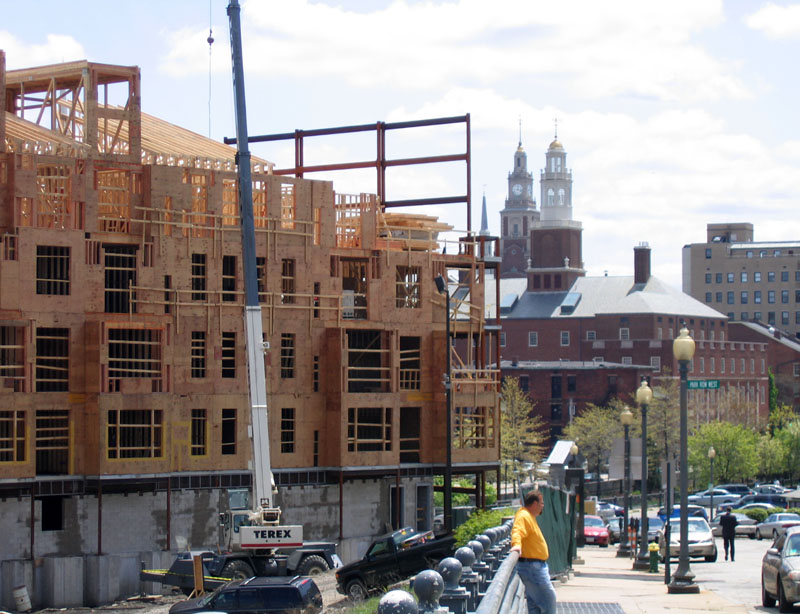 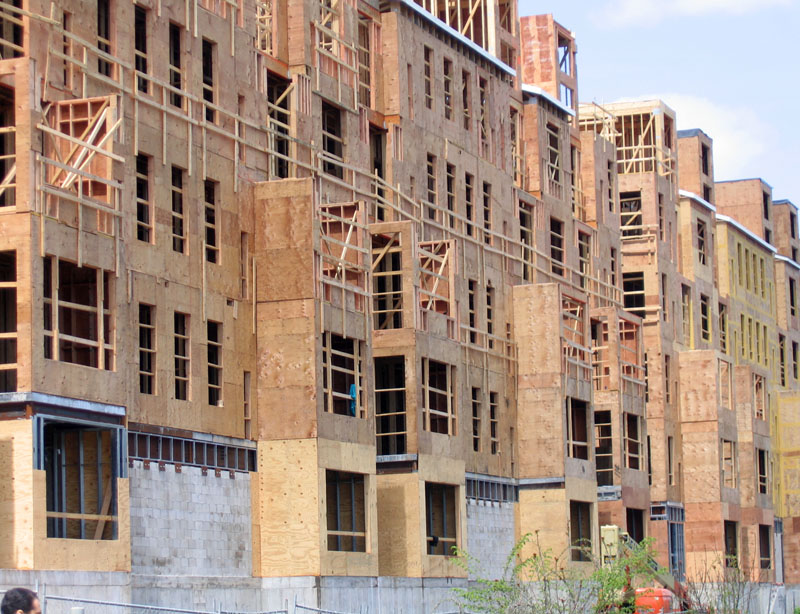 The Hampton Inn is moving into the former St. Francis Chapel on Weybosset Street and also adding a liner building between the chapel and the Arcade Parking Garage. The addition features an arch which will serve as the driveway for the hotel and will feature a pedestrian passage between Weybosset and Pine Streets. 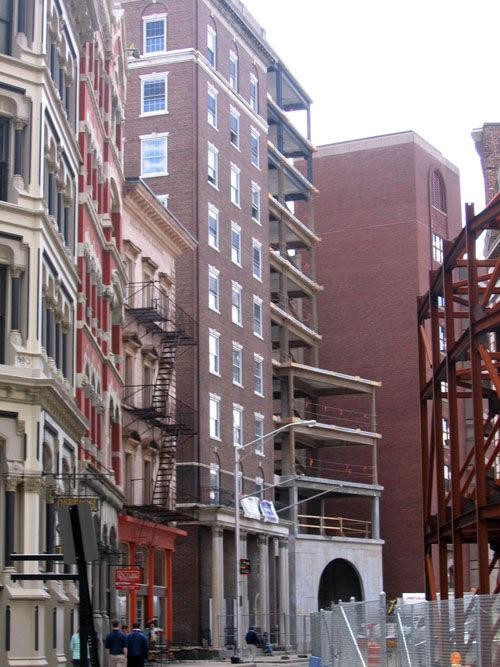 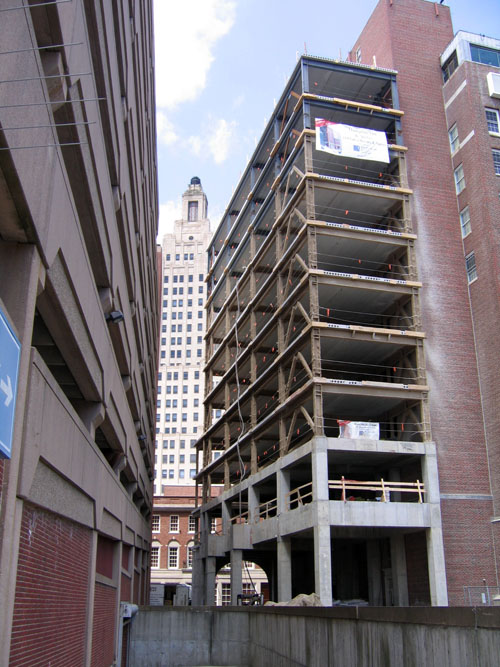 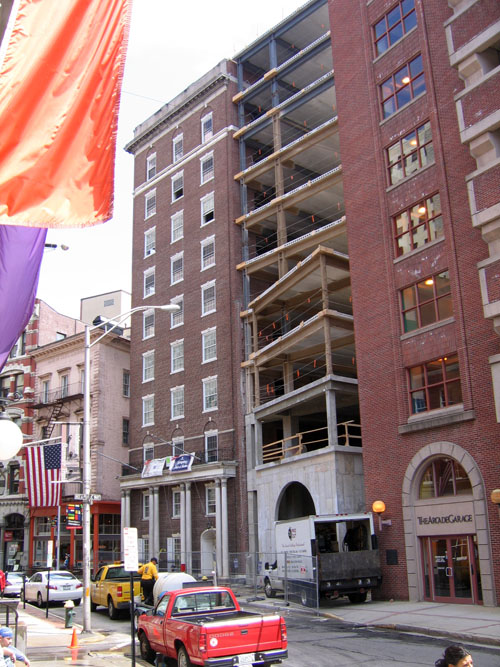 The new Blue Cross Blue Shield Building in Capital Center was lit up pink last night in recognition of the Flames of Hope WaterFire: The State House of course was also pink, but my photos of that came out crap. And, the...

As Bret pointed out in his recent post, the Blue Cross Blue Shield building at Waterplace may be one of the last highrises we see going up for a while. So I stepped out the other day and took some photos of the progress...