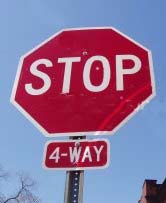 An accident waiting to happen?

The problem is that you have legions of Brown students who are still naively strolling into that intersection without a care in the world, expecting that traffic will stop for them as they always have, now shocking drivers unfamiliar with the old ways. You also have generations of drivers trained to stop at that intersection, and I’ve seen more than one motorist reflexively stopping at the junction and get nearly rear-ended by someone clueless as to why a car would be rapidly coming to a halt somewhere without any signage or pedestrians visible.

While everyone will learn eventually how the new intersection works, I just hope there are no injuries in the interim. Perhaps there should be some temporary “Traffic does not stop” signs there for a while to train pedestrians and motorists.

A Greater City Providence reader submitted this photo and statement on the photo: This is Brown Street at Angell Street. I am so old I remember when “Cross Traffic Does Not Stop” was exactly what you could...