Have you ever walked or driven around Providence and asked yourself about the origins of a landmark? Who was Rochambeau Street named after? How did a streetcar get on the top of the “Superman” building? Why is the train station’s clock never correct? What did Providence look like before I95 was built?

“Who/What/Where/When/Why,” or “5W,” is a new feature we plan for the Greater City Providence blog to try to answer burning questions like these and is the first of several ongoing article features we plan for the site. We invite you to ask us questions in the “comments” section and we’ll try to find answers for them in future 5W columns. 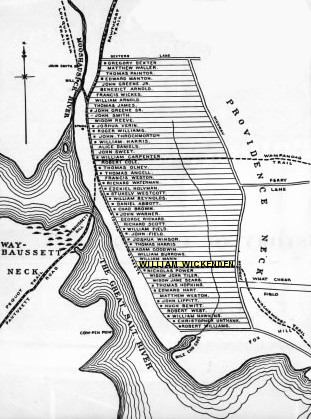 One question I’ve always had is “Who is Wickenden Street named after?” For those who aren’t familiar with the city, Wickenden Street is on the south end of Providence’s East Side. It has gone through many incarnations over the years. It started as farmland during the city’s early decades in the late 17th century and then later become the focus of the city’s shipping industry during the 19th century, including housing some light industry. It was also home to one of Providence’s earliest and strongest Portuguese communities. It fell into decline as Providence’s shipping fortunes waned but is now thriving as one of the city’s most unique and character filled neighborhoods, filled with restaurants, galleries, and shops. Wickenden and its narrow surrounding streets are home to a diverse array of people and buildings, from students hovels, to million dollar homes, to the Our Lady of the Rosary Portugese church, to one of the newest national outposts of the Moishe Kavod Houses serving young Jews in their 20’s and 30’s.

Like many East Side streets, Wickenden is named after one of Providnece’s early settlers, William Wickenden (ca. 1614-1671). The Wickenden family originated in Cowden, Kent, England and William was thought to have been born in Oxfordshire, although the exact town of his birth is apparently uncertain. He came to America before 1634 and lived in Salem, MA for some time. Wickenden was thought to have become a minister in America and later followed Roger Williams to Rhode Island in 1636. Wickenden served in the Rhode Island Legislature in 1648, from 1651 to 1655, and again 1664. He served as the fourth minister at the First Baptist Church in America in downtown Providence. William Wickenden died on February 23, 1671 in Providence. After his death, his son-in-law, John Steere, and his daughter Hannah sold the area that now makes up contemporary Wickenden Street.

Can I get there from here?

The ProJo recently covered the story of retailers feeling cut off by the reconfiguration of Route 195. On the old alignment of Route 195, Exit 2 went to Wickenden Street and the big green sign on the overpass said as...

For the next installation in the “Who/What/Where/When/Why” (5W) feature reviewing aspects of Providence’s urbanism, history, architecture, and living, I decided that as the Main Post Office’s new...