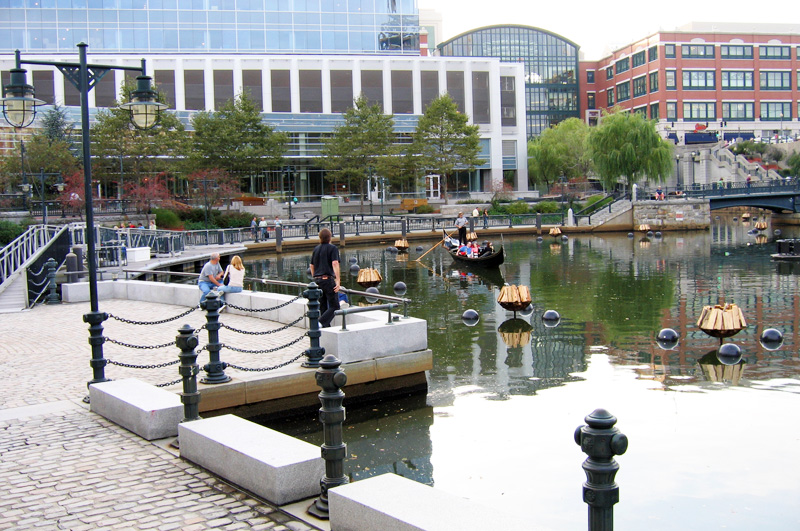 The American Planning Association has named Waterplace Park one of their Top Ten Great Public Spaces for 2008. Waterplace Park is a good public space of course, and vital to the Renaissance of Providence, and it is great to get the national recognition. However, I for one feel it is still a work in progress and has a way to go before it is great.

In the accompanying slideshow, the APA calls Waterplace, “safe, clean, well-planned, and contemporary, creating a welcoming, open space for visitors and locals alike.” Any of us who have lived in Providence for any time, and spent time in Waterplace (outside of WaterFire nights) may question that assessment.

On the safety issue, both RISD and GTECH last summer sent warnings out to their personnel telling them to avoid Waterplace due to a number of violent muggings in the Basin area. Walking through Waterplace when there is nothing programmed there, one is often alone, creating at least the feeling of insecurity. More people around makes people feel safe when, as often is the case, Waterplace is deserted it feels, and at times is, dangerous. 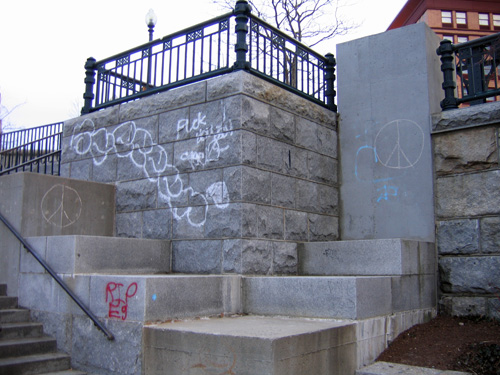 As for it being clean, Waterplace has had an on-going struggle with graffiti. Periodically the park gets bombed with tags and the city and Parks Department are often too slow to react to it. 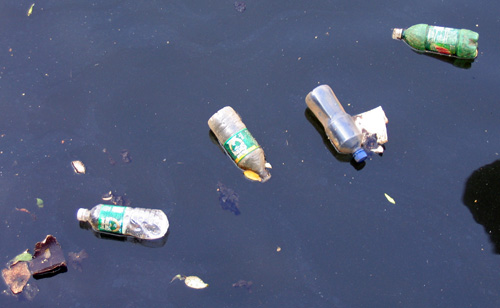 Pollution, especially of the water itself, is also a perennial problem at Waterplace. Storm runoff from points west of Waterplace pushes trash and other pollutants into the river after storms, creating a mass of detritus and often foul odors. The APA article refers to Waterplace having a fountain, it doesn’t. What I have been told is that the fountain had to be removed because the water in the Woonasquatucket is so dirty, it was throwing a toxic mist into the air. 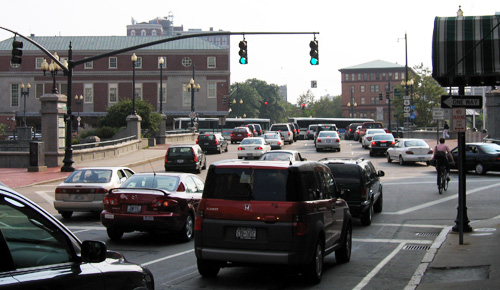 I’m going to pile on some more and question the planning of the park. Waterplace and the basin area is laid out well, GTECH and the Waterplace condos are integrating into the park well (it will be nice to see the riverfront retail spaces at Waterplace occupied). The bridges are well placed, the amphitheater is a great addition, the tunnel to Union Station Plaza and on to the skating center work well and make for convenient circulation… However, there is a huge gap in the pedestrian circulation. The Basin and Waterplace areas north and west of Steeple Street are below street level. At Steeple Street the walkways ramp up to street level and the riverwalks south of Steeple remain at street level. As you can see in the photo above, Steeple Street is a huge traffic sewer and pedestrian movements are given short shrift here.

Other areas where planning was shortsighted were: Obviously maintenance, who or what and what money is responsible for removing graffiti, clearing snow, fixing walkways, maintaining plantings, repairing broken infrastructure, etc. Maintaining water depth: the Woonasquatucket is desperate for dredging, but there seems to be no plan for doing this with any degree or regularity, and certainly no planned funding sources for the work. Programming: something which came up in the recent Downtown Charrettes. The lack of people in the park contribute to the feeling of insecurity, so how do we go about getting people in the park? WaterFire of course draws tens of thousands, but WaterFire is only a score of evenings a year, what about the rest of the time?

Some of these issues can be addressed. As I pointed out above, eventually the Waterplace condos will have some sort of restaurant/retail tenants at the river level of their buildings. This will bring both programming, a reason for people to be in the park, and security, eyes on the park, being the shoppers or diners going to those spaces.

Further down the riverwalk between Washington Place and College Street we see where RISD maintains the park. RISDs section being arguably the most well maintained area of the entire riverwalk. More public/private partnerships to maintain portions of Waterplace and the riverwalk could go far towards making it the great public space it deserves to be.

Another idea for getting people into the city’s parks, including Waterplace, is free wifi. If there were wifi in the parks it would give people something to do while they are there, and the wifi itself (coupled with comfortable seating and someplace to get a drink and a snack) could even be a draw in and of itself.

Waterplace is a wonderful and unique space, and we are terribly fortunate that the stars aligned to bring people with ideas and funding together to make it happen. We should be treating it like the treasure it is.

Under the Exchange Street Bridge in Waterplace Park; Tuesday, March 27th, 2007. It’s that time of year again, it seems like every year around this time, Waterplace becomes covered in graffiti (as does much of the...