I am so pleased that Washington Trust has moved from their horrid suburban style branch on Washington Street, to this nice new urban storefront on Westminster Street (I’m especially enchanted by that new sign, Love. It.). Banks are not the most exciting retail development for a downtown, and too many of them can actually put a damper on pedestrian traffic, displacing other retail that would generate foot traffic. But seeing an unused storefront put to use is great. And seeing a company turn it’s back on a location that was plainly designed for the automobile in favor of a location that is all about people on foot, that’s delicious.

So now that Washington Trust has their new digs with the awesome signage, my thoughts immediately turn to what should be done with their horrid little drive thru ridden former home on Washington Street?

My first instinct is to cry, “tear the sucker down!” It is terrible, it is not urban, it rips a huge hole in the street wall. It has a drive thru, it has surface parking, it is only two stories tall, it has almost zero glazing on the facade… But the environmentalist in me pauses for a minute to think tearing an existing building down, even such a tragic one, is a waste. Granted, much of the waste from demolition is recycled these days, but just the energy expended to build and then tear down the building is a waste. The other thought is that our history with tearing stuff down to build new stuff isn’t good. I’d rather see this dumpy box sitting around for years to come than see more surface parking.

Dave suggested the other night that this could possibly make a good location for a music venue. It is two stories tall, perhaps a hole could be cut between the two levels to allow for an upper level with a stage below. I could see that bare facade spruced up with a flashy marquee. It is in our Arts & Entertainment District with Trinity, AS220, and Lupo’s all steps away. Dave also suggested the adjacent surface lot could be used for outdoor festivals with the drive thru serving as a bar area, serve beers right out the window. I could see the surface lot becoming a beer garden (on nights when there are no shows) and this being the place to be on summer evenings, drinking beers and meeting friends al fresco.

So I’m torn. It would be wonderful to see that whole end of the block rebuilt with a nice 4-6 story building, retail on the ground, office/residential above. But on the other hand, perhaps this could be creatively re-used. I know I don’t want to see it torn down for more parking, and I don’t want to see another bank or a McDonald’s move in there reusing the drive thru. 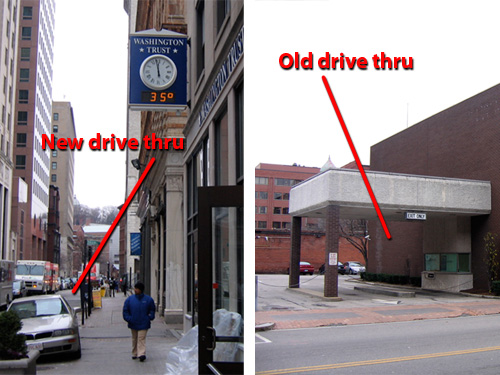