Russian Sub to be scrapped 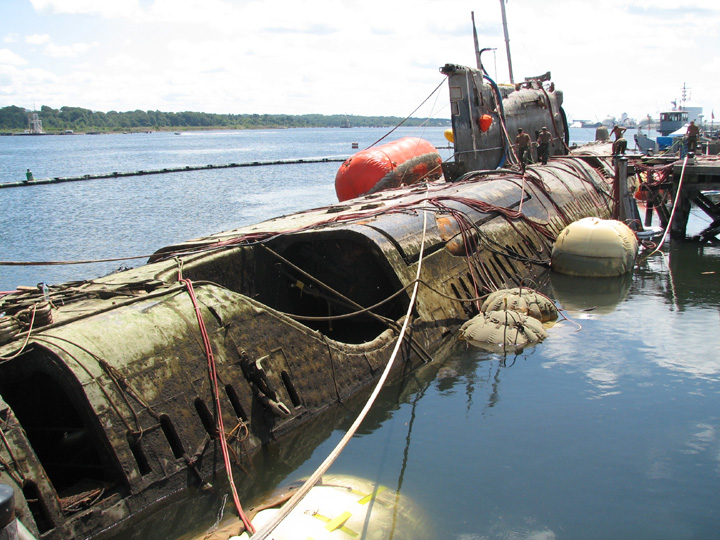 The Russian Sub Juliett-484, which sank in a storm in April 2007 will be sold for scrap Frank Lennon President of the Russian Sub Museum reports.

PROVIDENCE, RI: The Russian Sub Museum today announced an agreement on the future disposition of the former Soviet cruise missile submarine K-77, which sank at her Providence waterfront mooring during a vicious storm in April of 2007. The sub, popularly known as Juliett 484, was raised this summer by Army and Navy divers in a training exercise that received worldwide attention.

Rhode Island Metals Recycling, LLC has contracted to take over the sub, move it downriver to property it controls at 434 Allens Avenue, and eventually dismantle the vessel for scrap if no one steps up to buy the vessel intact. Detailed terms of the agreement are confidential and were not announced.

The submarine, featured in the 2002 Harrison Ford film “K-19: The Widowmaker,” was a local attraction and educational facility from August 2002 until it sank. It was open daily for tours, and events ranging from Scouting overnights to birthday parties took place there.

“We made every effort to figure out a way to restore this historic vessel and reopen her as a public attraction,” said Frank Lennon, director of the Russian Sub Museum. “Marine surveyors and salvage experts helped us evaluate the options, and we finally concluded that after 15 months underwater, the condition of the interior is such that restoration is simply not a financially viable option for our group,” he explained.

However, Ed Sciaba, representing Rhode Island Metals Recycling, understands that the restoration option may well work for someone else. “Given the condition of the world scrap metals market, there is still a good chance for another end user to step in, purchase the sub and relocate it,” says Sciaba.

If the sub is indeed scrapped, the Museum will first remove and preserve certain equipment for a future display about Soviet Cold-War era submarines in general, and K-77 in particular. Lennon will also allow Russian sub museums elsewhere in the world to purchase certain artifacts and equipment they may be lacking in their own displays. “We plan to remove items such as the periscopes, torpedo tube doors, missile firing stations, engine order telegraphs, and various other controls and gauges,” he explained.

Lennon noted that the timing for this transaction was not ideal, given local and world economic conditions. However, the sub must be moved from its current location. Repairs to the piers damaged in the original sinking cannot begin until the sub departs, and all concerned would like to see Collier Point Park and its public boat ramp reopened. The new site is also more protected.

“Our landlord, Dominion Energy, as well as the Coast Guard and other regulatory agencies have been very fair and patient with us through this whole ordeal,” said Lennon. “We owe it to them to move the sub as quickly as possible.”

According to the terms of the agreement, the sub will be towed away before the end of January.

A reader submitted this photo taken from the Iway Bridge of on-going work at Collier Point Park. Collier Point Park is where the Russian Sub used to be (well, still is, but not for long), off Allens Avenue just under...

Replacement for the Russian Sub?

Reading Jef’s post below about the U.S.S. Saratoga reminded me of a piece that I had (somewhat) recently read in the Wall Street Journal and had been meaning to post about. The Navy has apparently been looking to...