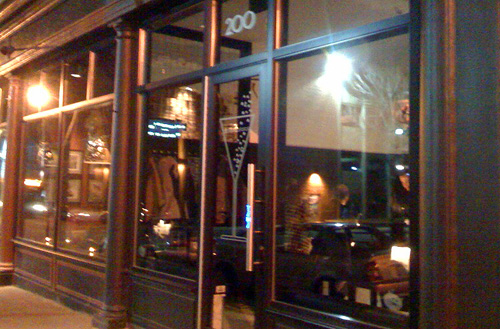 I’m not really the restaurant reviewer, my reviews tend to be either, “I liked it, it was good” or “I didn’t like it, it was bad.” I’m not a big foodie, I like what I like and don’t like what I don’t like. I liked Tini.

Went to Tini last night for drinks and dinner and drinks and dessert and drinks. Tini is a bit esoteric for Providence, but I think we can handle it, it feels like it was transported straight out of Tribeca, and that’s a good thing. It is at 200 Washington Street (between Gracie’s and Bravo), most recently it was a wiener place.

The restaurant is it’s name, tini. There are perhaps 25 bar stool seats arranged in a U-shape and that’s it. The bartenders/waiters/servers (I’m not sure what you would call them, but they are very cute) stand in the middle of the U dispensing drinks, telling you about the menu, and bringing you your food. The menu changes frequently, at the very least weekly, with a few stand-by’s staying on week to week, such as the tini weenie (an homage to the space’s former tenant).

We arrived at 5:30pm and the place was pretty well packed with pre-show crowds on their way to Trinity Rep. I started with a cosmo (it just felt right to have a cosmo in such a New York feeling space), for my dinner I had a grilled oyster and chorizo jambalaya (a special in honor of Mardi Gras). It was delicious and served with Mardi Gras beads, yay! Dessert was a flour-less chocolate cake and I had another cosmo and a raspberry lime ricky in there somewhere.

The food was delicious (like I said, I’m no foodie, my review ends at “I liked it”), the space is warm and cordial (did I mention how cute the servers are?), and the prices were reasonable. Reservations are accepted early, but later in the night it is pile in and find a seat where you can. Sitting elbow to elbow you get to chat with other parties, something that is a little off-putting for a lot of us button down New Englanders, but nice once the ice is broken. We also had a fun James “ooh piece of candy” Woods spotting.

It has been a while, doing a little holiday time hibernation, but due to popular demand, Urbanist Drinks! is back. As before, Urbanist Drinks is a simple monthly(ish) time to meet and mingle and drink and discuss urban...

Urbanist Drinks is a simple monthly time to meet and mingle and drink and discuss urban issues throughout the region.

I’m on the Downtown Neighborhood Alliance mailing list and received their minutes from their last meeting today. Below are some items of interest from those minutes. Parking lot formerly known as the Providence...