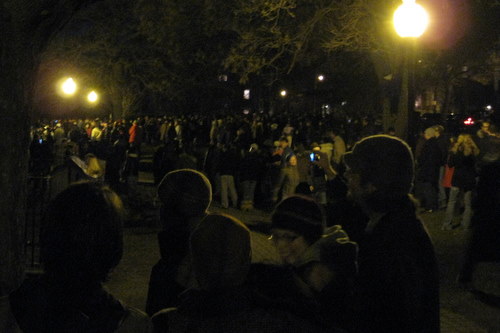 Yesterday, the Projo blog posted that the restaurant Pizza Queen approached the Board of Licenses requesting a license to operate 24-hours.

To make things interesting, they requested the approval to “keep the lights on and the oven hot” so that they can continue the delivery service after hours. This, the board decided, could be done on a trial basis.

The Projo reports that the reason the board won’t allow 24-hour restaurants downtown as “chronic problems with violence and traffic congestion associated with the weekend nightlife”.

I could certainly see this being a serious problem… if there were only one restaurant open. If the goal is to thin out the crowds of people leaving the clubs that all seem to congregate and cause problems, why isn’t the solution to give the 24-hour option to all businesses? What if there were 10 or 20 restaurants downtown that wanted to be open 24 hours? Would that solve the problem?

Another possiblity that has been discussed a lot is the option of having clubs stay open an hour or two later and not admit any new patrons, with only non-alcoholic beverages and snacks served, after 1 or 2am. In theory, this would allow the crowds to slowly end their evening of fun, instead of being forced out into the streets fully revved up after last call.

Combine the option of later closing times and more 24 hour destinations, wouldn’t this help the issue of unruly crowds in the streets when everything closes at once?

Work will begin soon on the redevelopment of an historic Jewelry District building into 57 apartments and ground-floor restaurant space, and the new owners hope to have the building reopened by the end of 2016.

ProJo has a series of videos on biking in Providence.