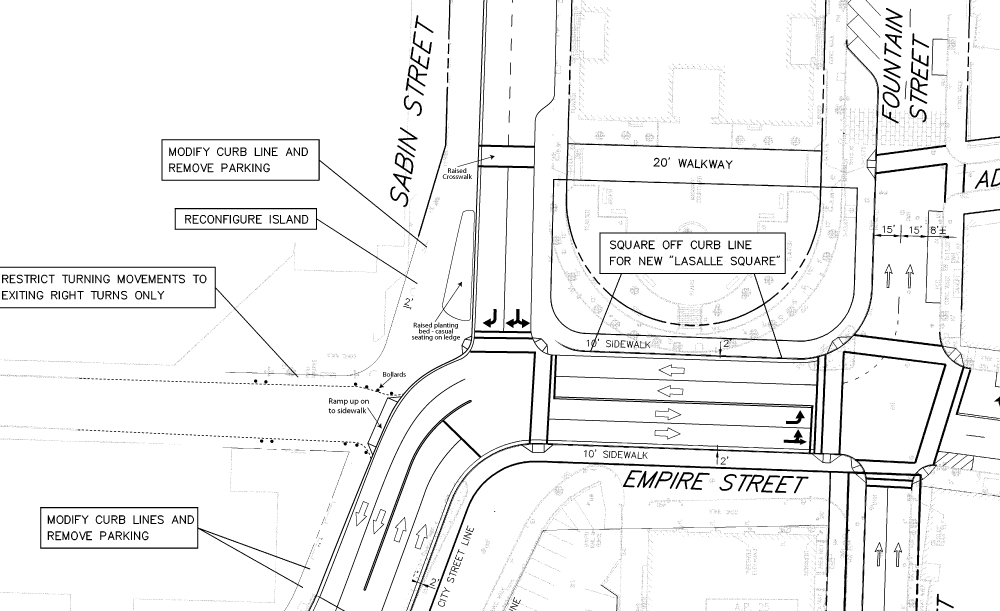 Last month we took a look at the city’s plans for the redesign of LaSalle Square. The city is planning to make Empire Street two-way for the entire length (from Weybosset/Broad to through the square to Sabin Street). The city has had some back and forth with RIDOT on the issue, so the current plans do not reflect two-way Empire Street.

I’ve given some thought to how Empire should move through the square and above is a drawing of my idea.

Make Empire and Broadway one continuous through roadway. Make Sabin end at a T at Broadway/Empire. This makes for just two light movements. Broadway/Empire green with no turns, just straight through. And Sabin green with left and right onto Broadway/Empire. No need for special light cycles to get different turns accomplished, very easy predictable geometry for drivers and pedestrians. If the lights are timed right, one should be able to drive from Broadway and Dean to Empire and Weybosset and beyond without stopping.

Aborn Street, which runs between the Dunk and the Hilton is technically a public street, though it does not actually run anywhere and effectively acts a driveway for the Dunk. Since it has almost no public traffic, I’ve downgraded it from a full street to a plaza-like configuration. The street climbs up onto the sidewalk, bollards on the sidewalk mark its path. See the plaza at the RISD Chase Center for an idea of how this would work. The Chase Center plaza doubles as open space and a loading dock for the Museum and other adjacent buildings.

Sabin Street is pulled away from the Dunk to make it meet Empire/Broadway at a right angle. The space where Sabin used to be outside the Dunk gets replaced with a raised planter that can double as casual seating along the planter ledge. This puts a barrier between traffic and pedestrians and also funnels pedestrians along the sidewalk properly. 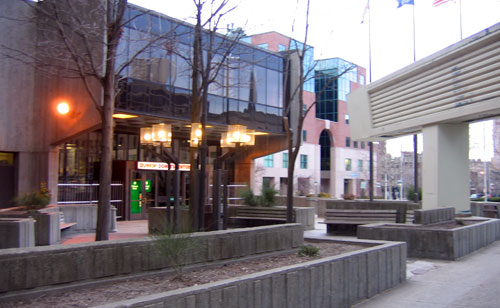 Dunkin Donuts Center prior to renovations • Photo by Jef Nickerson

At the Aborn end of the Dunk there is currently a sad little plaza that could and should be upgraded to make a small pocket park outside the Dunk. There was a small, not too terrible, pocket park at this location prior to the Dunk renovation, it was behind the giant electronic sign and really underused before. Having a park that is more open to the street, combined with more foot traffic in LaSalle Square would make for a more successful park at this location.