Last part of 195/95 interchange to open next week

The final portion of Route 195 westbound traffic is scheduled to move to the new Iway alignment next week (Tuesday morning weather permitting). Traffic on 195 west heading to 95 north is the only traffic remaining on the old portion of Route 195, this traffic will move to the new ramps south of the old interchange. With all traffic off the old alignment, demolition can commence in earnest.

The Iway project is about to reach a significant milestone, the opening of the last highway segment of the relocated interchange of I-195 and I-95 in Providence. The new highway from I-195 West to I-95 North is scheduled to be open on October 20, 2009, weather permitting.

RIDOT expects the change to have a dramatic impact on I-195 West, which long has been one of the most congested sections of highway in Rhode Island, especially during rush hour. Opening this part of the highway has other implications, including on and off-ramps. Also, the I-195 split will be moved from its current location near the Washington Bridge to just after the new Providence River Bridge. There will be four lanes of traffic leading up to the split, two left lanes for I-95 South and two right lanes for I-95 North. The center right lane allows access to either direction on I-95.

The new exit 20 from Route 95 north to Point Street will also open last week. Exit 20 in part makes up for the loss of the Dyer and Wickenden Street exits off the old Route 195 east allowing for access to the Jewelry District, Hospitals, and other areas south of Downcity. 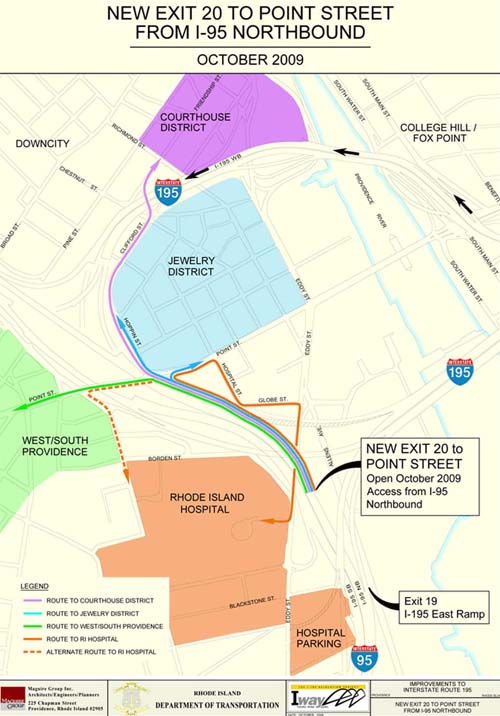 Won’t it be so cool when we can finally say that? On Thursday morning (weather permitting) the Iway project brings us another step closer. Video by Jef Nickerson From RIDOT: RIDOT is getting ready to open the next...

You can’t get there from here

Photo © katrinkles from Flickr Starting December 6th (weather permitting) the end of Route 195 and the reconnection of Downcity and the Jewelry District begins. All traffic on Route 195 eastbound will move to the...