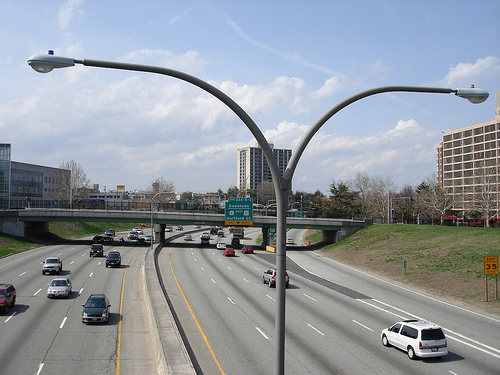 According to a new Census Report more than 80% of Rhode Island workers commuted to work in single occupant vehicles (in 2007 and 2008). Chris O’Leary at the On Transport blog asks why, and it is a good question. The survey is based on Rhode Island residents, not people who work in Rhode Island. Our small size and the fact that our metro straddles the state line and interstate public transportation is anemic to non-existant could be part of the reason. Even where pubic transit exists, Rhode Islanders seem to view it poorly (deserved or not). 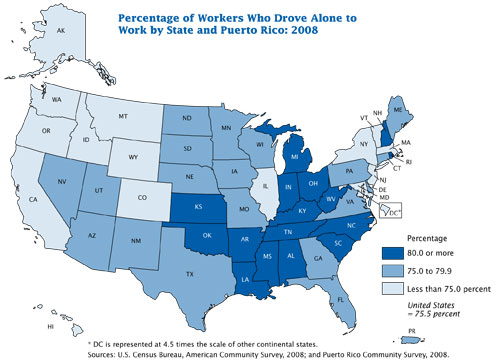 Of course it is not just buses and trains that Rhode Islanders are eschewing, we could be walking and biking more. But even if you live and work in Providence, walking can be a hassle, especially when it snows. Our roads are often covered with sand, broken glass, and other debris (when they aren’t simply just one giant pothole). The suburban bike paths don’t reach into the center of the city and bike lanes are hard to find. If you live and/or work outside of Providence, well then biking and walking is verging on the impossible.

Maybe our commutes are just too short to make people consider other means than to drive by themselves. When your commute is round about 15 minutes, it really doesn’t seem too onerous.

But as Chris states in his post, it shouldn’t be too hard to fix the physical barriers that are keeping Rhode Islanders in their cars (by themselves):

It may not be that density and transit use are always correlated (see: Los Angeles), but such a dense state would require a significantly smaller per capita investment in mass transit than, say, a sprawling state like Kansas (driving alone accounts for practically the same share of commuting in both Kansas and Rhode Island). Shifting mode share in Rhode Island could be much easier than in places.

What do you think is keeping Rhode Islanders driving by themselves, and what would help to change their habits?

Next Stop: Making Transit Work for RI with Jarrett Walker

Concepts and priorities discussed will help to inform a detailed 10-year proposal for transforming our state’s transit system a catalyst for sustainable economic growth.

View Larger Map We asked for it, and we got it! As Daily Dose reported last night, Google Transit now includes the state of Rhode Island. This means that now whenever you use Google Maps to find directions in Rhody, you...