Paris: You are responsible for all users who are lighter than you are

Streetfilms takes a look at how Paris is rethinking their streets. A big part of it is changing the equation from moving traffic, to moving people. The rules of the road are that you are responsible for all users who are lighter than you are; trucks responsible for cars, cars for bikes, bikes for pedestrians… As in other parts of Europe, Paris is looking to slow traffic and make streets more livable. This includes streets with 30km (18mph) and 15km (9mph) speed zones. For contrast, the speed limit in Providence is 25mph.

Paris is also utilizing shared space zones, what the Dutch refer to as a Woonerf.

Woonerfs were popularized in the Netherlands in the 1970’s as a reaction to the growing dominance of the automobile over bicycles. During the first few years after World War II, Dutch transportation engineers began to emphasize relocating bicycles onto separate paths to accommodate the growing number of vehicles on the streets. This created a backlash, and the country soon moved in the opposite direction. Motorists were now forced to make accommodations for everyone else. The intent of this new approach was not to make cars disappear, but rather to integrate motorists and other users of the street into a shared space.

While the Woonerf was originally designed for residential areas, Paris is utilizing shared spaces in the city center, including areas that are designed to mix pedestrians, bikes, and buses. And StreetsWiki lists Commercial Street in Provincetown as an example of a Woonerf. 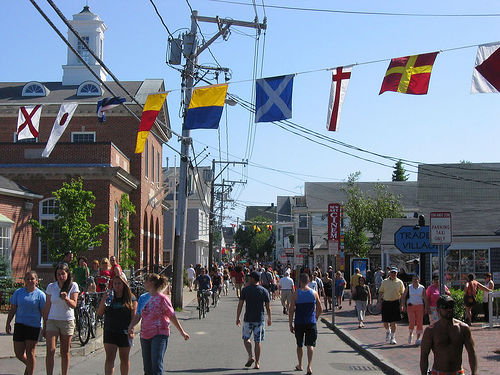 Commercial Street in Provincetown is open to all modes, yet pedestrians and bikes dominate | Photo (cc) muckster

Here in Providence our streets came together in the age of pedestrians and horses. Autos are late to the scene, but we’ve embraced a culture where our roads are for cars, and other modes are secondary. In Paris they are moving back to moving people, making consideration for modes, and valuing the safety of the most vulnerable modes, in the process making a more livable city.