The time for us to make investment in transit is right now.

Today, RIPTA released their long awaited Metropolitan Providence Transit Enhancement Study, which looks to improve transit within the Rhode Island urban core centered on Providence, Pawtucket, Central Falls, Warwick, East Providence, Cranston, and North Providence. While the proposal to build a streetcar network in the capital city is getting the most attention, the report actually outlines many initiatives to improve transportation within the metro core.

Video of the Mayor’s speech

The streetcars, though flashy, and fun, and cool (and expensive) will only be a small part of our future transit system. Now and in the future, buses will be the work horses of our public transit system. RIPTA sees the need for more buses, more frequent service, more service at night and on weekends, and additional lines in new service areas. RIPTA hopes to deliver on those needs, “RIPTA aims to provide a ten percent increase to existing bus service to strengthen corridors that already enjoy high ridership and levels of service.” 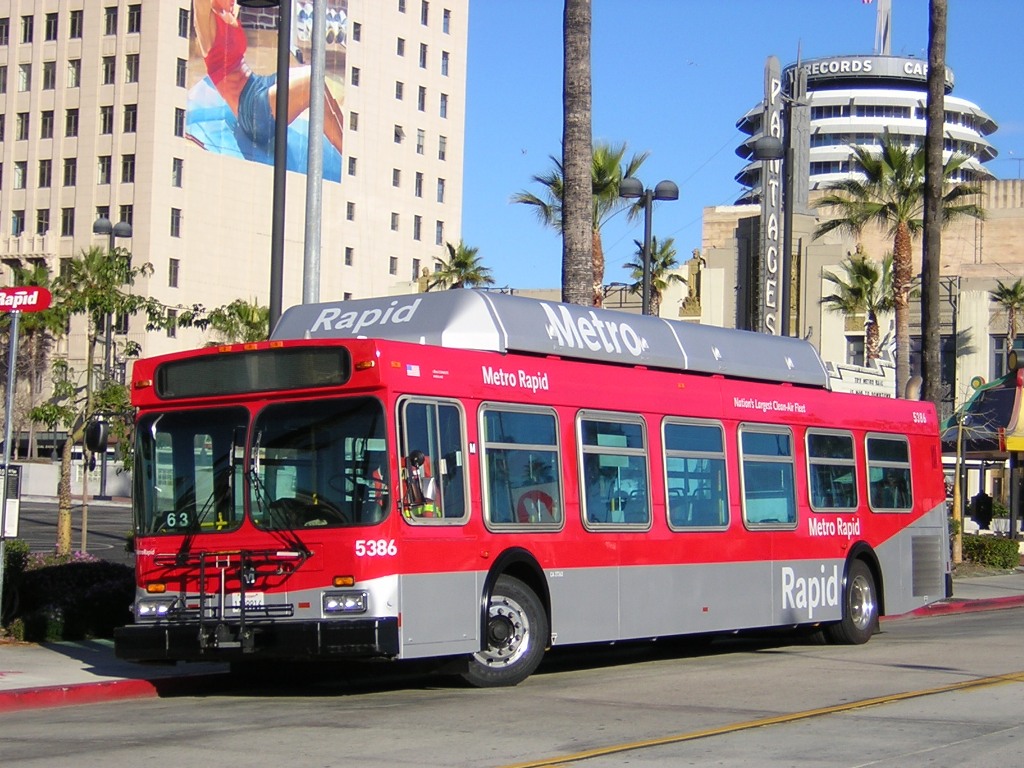 A new concept for RIPTA is Rapid Bus . Rapid Bus will function much like a BRT line, except it will not feature BRT’s separate bus lanes (at initially it won’t).

RIPTA’s first Rapid Bus line will combine the current Route 11 Broad Street with the current Route 99 North Main Street and Pawtucket. These two routes will be combined to provide continual service through Providence with one distinctive brand applied to the new route. These two routes in their current form serve 10,000 riders per day. Future enhancements to this route may include the reconstruction of North Main Street to provide true BRT service with designated bus lanes in that area.

I suggest that the current routing of the 99 be modified slightly at it’s southern end so that the bus passes by Providence Station, making a direct connection to the MBTA and Amtrak for this Rapid Bus line. The bus should leave North Main, head to Smith, to Gaspee, serve the train station, then use Francis to reach Kennedy Plaza. This re-route also has the benefit of bringing the Rapid Bus service closer to the state offices on Smith Hill. Eventually, Providence Station should be re-designed to allow Exchange Street to pass through the station area, with bus services using the Exchange extension for direct connections to Kennedy Plaza (more about that in a later post about Providence Station).

RIPTA is still working on some final plans for the Rapid Bus. Naming of the combined line, and branding issues need to be worked out, and RIPTA will be asking the community for input on these questions. When branding the Rapid Buses, RIPTA should keep the future streetcar system in mind. The Rapid Bus and Streetcars should share a branding and numbering/naming scheme. Rapid Bus should be thought of as an extension of the streetcar system.

The 11-99 is planned to be the first RIPTA Rapid Bus Route. While most of the planning for, let’s call it, Rapid Bus 1 is in place, now is the time to start planning Rapid Bus 2 and Rapid Bus 3, and 4, and 5… Where do you think the next Rapid Bus lines should be established? 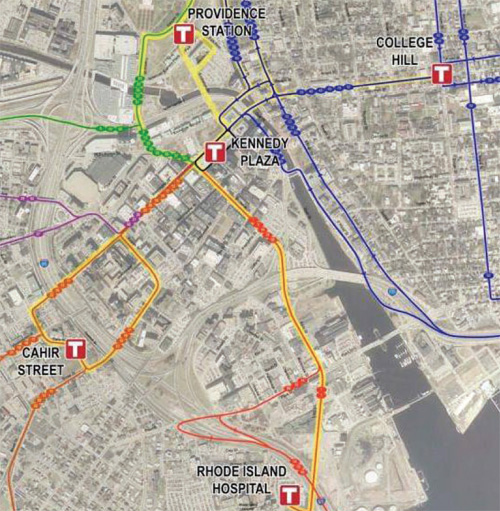 The plan also calls for the development of four new sub-hubs around the periphery of Downtown Providence. Sub-hubs will be located at Providence Station, the top of the tunnel on Thayer Street, near Rhode Island Hospital, and on the West Side on Cahir Street.

With new smaller hubs, taking the bus will take less time. Extending RIPTA bus routes beyond the primary downtown destination of Kennedy Plaza to other hubs just outside of downtown will eliminate the need for many passengers to transfer to reach their final destinations. In this plan, RIPTA will develop new hub locations in the West Side, College Hill, Capitol ill and the Hospital District areas. These will attract riders because trips will be more convenient, accessible, and highly visible in new key locations. Additionally, dispersing waiting buses to these new hubs will help the reinvention of Kennedy Plaza by decreasing its congestion.

The first sub-hub developed will be the West Side Cahir Street location. This sub-hub will include new bus shelters, map and schedule information, bike racks, and in the long term real-time arrival information, public art to relate it to its local neighborhood, and new branding of bus service. The 49 Camp Street, 52 Branch Avenue/Bryant University, and 90 Park and Ride buses will be extended from their current termini in Kennedy Plaza to the new West Side sub-hub. The second sub-hub to be developed will be the College Hill one with Providence Station and Rhode Island Hospital to follow later.

I wrote earlier about the potential this sub-hub has to revitalize the upper Broad Street area, which is currently plagued by many vacant buildings. With the high schools and Crossroads RI being this site’s primary neighbors, and the fact that high school students and the homeless are often labeled as (sometimes rightly so) a nuisance in Kennedy Plaza and a reason that people eschew the bus system, careful thought will have to be given to how to develop and police this area.

Recent improvements to the Kennedy Plaza area have resulted in a dramatic reduction in crime. Police stated at a meeting I attended recently that arrests in Kennedy Plaza were down 90% in the last two years. This while more people than ever are riding the buses. The reduction can be attributed in large part to the mix of uses in the plaza. Lessons learned in Kennedy Plaza should be applied to the new sub-hubs to ensure the past bad reputation of Kennedy Plaza does not manifest itself at the sub-hubs. Vibrant mixed use environments coupled with a health police and security presence will go a long way toward making these sub-hubs attractive urban environments. 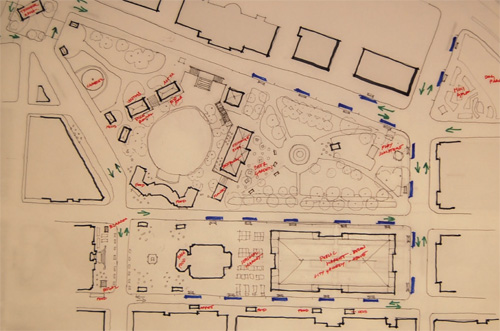 The Greater Kennedy Plaza Working Group has been doing great work to improve the plaza (Deb Dormondy should be thanked for her hard work in this area). Kennedy Plaza and surroundings now feature great urban amenities such as cafe seating, Thursday night beer garden and music (during summer months), vendors, frequent festivals, and more. The Greater Kennedy Plaza work really deserves its own post and I will get to that soon, I promise.

Planning has started (some of which I have been involved with) to reinvent Kennedy Plaza , de-emphasize the bus functions, and make it a compelling urban space. The dispersal of the buses during the recent paving project give a glimpse of where the buses could go, freeing up the central plaza.

I will write a more in-depth post about all this soon.

Did someone say something about Streetcars?

Yup, streetcars , just like a real city! Let’s take a deep breath for a second and acknowledge that streetcars are going to be hella expensive. $76 million of the $126 million projected capital budget for the entire set of recommendations is allocated to streetcars. And the streetcars would incur $2.7 million in annual operating costs (costs which the federal government does not (currently) fund). This is all for just the approximately 2 mile starter line. The Mayor today presented a vision of a network of streetcars covering the entire metro area stretching beyond Providence’s borders (I get a little light headed just thinking about it, someone pinch me).

But yeah, streetcars, pretty awesome, huh? The starter line will cover the so-called “Meds & Eds” route running from Rhode Island Hospital to the Kennedy Plaza area then splitting into a branch that goes to Providence Station and another which goes up the bus (guess we’ll have to start calling it the bus & streetcar) tunnel to the Thayer Street area near Brown (get it? Meds & Eds?). Even this small line is projected to carry 1 to 2 million passengers per year. The streetcar line is designed to make Providence a more walkable city, spur economic development (especially in the Jewelry District and along the 195 land), and help put a better face on transit in Rhode Island.

Honestly, I’m excited about Rapid Bus and can’t wait to see that in action and eventually expand, but let’s admit, most people poo poo buses and only get excited about transit when it has steel rails beneath it. Getting RIPTA into the streetcar business will go a long way to change public perception of RIPTA. RIPTA will morph from the current perception of “the poorly funded agency that runs those smelly buses that poor people ride for free” to “that wicked pissah agency that runs those super cool streetcars (that also operates a highly efficient system of buses that operate across the state).”

Show me the money!

The money is substantial, and as noted above, a large portion of it goes to streetcars. The Mayor says that 10% of the funding is in place. Some things have been paid for, such as some of the new buses RIPTA is looking at. But there’s still a lot that needs funding. The Mayor said they would be looking for federal, state, private, and yes local (local as in City of Providence budget, though the Mayor joked he’d be happy to find a funding arrangement that did not include the city having to pay anything). Funding will no doubt be complex with a myriad of sources. To that end, a Transit 2020 Action Group has been formed which includes mayors from some of the municipalities within the study are and others to work on the funding issues.

The Mayor pointed out that we are in a good position as the current Administration in Washington has indicated strong support for transit and this plan has the full support of Rhode Island’s congressional delegation, who will be tasked with chasing down federal funds. This week the President proposed $50 billion for infrastructure spending. The pot of available federal funds is growing, this is of course good news. 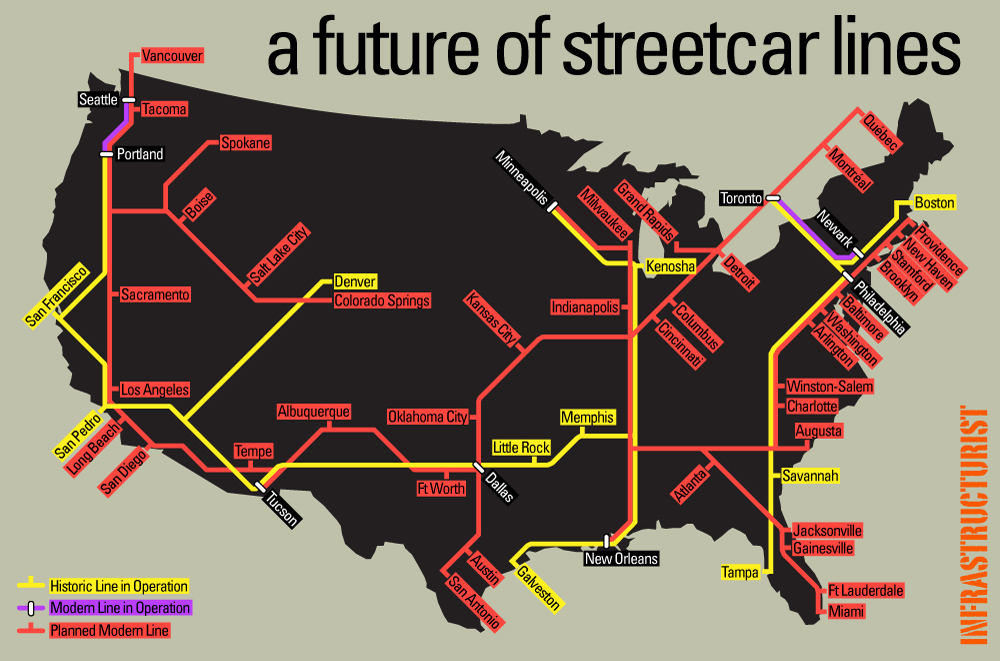 Infrastructurist posted the above map this week of all the cities looking to build or expand streetcar systems. We are not alone it seems. But I think we are in a good position to get access to those federal dollars.

Our built environment is ideal for a streetcar system. We have a very dense urban core that is small in area, making for a streetcar system that will quickly serve a large number of people. This proposed system, though it will help spur development in areas that are currently unbuilt or under-built is not being built solely as a means to spur future development, such as in some other cities, but will serve existing jobs and residents. Also, our streetcar proposal is part of a larger push to boost all modes of transit in the metro area, buses, commuter rail, bike, and even allowing cars to become part of an intermodal system by expanding park and ride facilities. It also doesn’t hurt that we are being absolutely brutalized by unemployment and the Administration in Washington would get good PR out of jobs projects that help turn Rhode Island around. We shouldn’t be too proud to play the sympathy card.

The Transit 2020 Action Group is going to have to hussle, but Providence does seem well suited to receive federal funds and get these projects moving.

As I continue to digest all this information and as you our readers digest it and comment on it, I’m sure we will have many more posts and much more to talk about here.