One of the recommendations of the Metro Transit Study is a series of sub-hubs around the periphery of Downtown. One of those hubs, and the one that will likely see streetcars the soonest, is at the top of the bus tunnel on Thayer Street. One of our readers asks, “how will a sub-hub work at Thayer Street?” And that is indeed a very good question.

There is limited space at the top of the tunnel for transit, traffic, pedestrians, and then the amenities one would expect at a transit hub. While I’ve heard no specifics for what a planned sub-hub at Thayer Street would look like (only some murmurs that Brown may have some land to use), I do have whacky schemes in my own head for what a transit hub could look like on College Hill. Here we will look at two of those whacky schemes, one slightly more grandiose than the other. Is this what RIPTA and the city are planning? Probably not. Is this something that could be done given political will, proper funding, and time? Sure, why not? 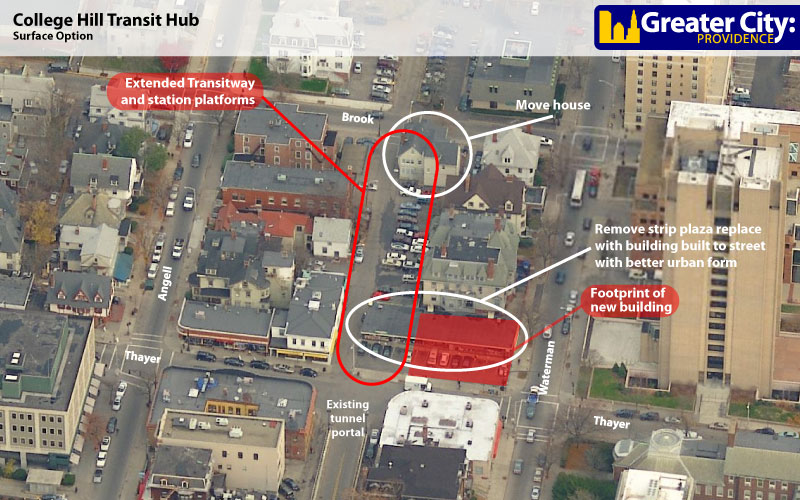 The first option is the Surface Option. It does not require any extreme engineering, but would require some land takings. Basically, the transitway would be extended from the current portal, along Fones Alley to Brook Street. Fones Alley is not wide enough for a proper Transitway so the house at the corner of Fones Alley and Brook Street would need to be taken (preferably moved elsewhere as though it is currently wrapped in vinyl, it is likely a very good house). Also, the strip plaza at the corner of Thayer and Waterman Streets would need to be taken. This I would be quite happy to see go as a strip plaza with surface parking between it and the street is not good urban design for Thayer Street. The building would be torn down and a new building, built to the street, with several floors would replace it.

Probably the most controversial takings would be the parking at the back of the buildings lining the south (right in the map above) side of Fones Alley. You can see, there are a lot of cars there, and they need to go somewhere (or maybe all those drivers could take the bus and streetcar).

With a wider right of way cleared at Fones Alley there is now room for buses and streetcars to move through and for large platforms for passengers to wait. Benches and roofs for the platforms should also be installed. One of the neighboring buildings (perhaps the new one built were the strip plaza was) can house a RIPTA information center, restrooms, and any office or dispatch space RITPA may need.

Until such time as streetcars are extended beyond this area, there will need to be a way for them to turn around. Assuming the streetcars can run backwards (i.e. there is a place for the driver at either end), a third lane for the streetcars to pull into at the end of the Transitway will allow the driver to switch ends of the car, then proceed to the inbound track and pass back through the tunnel without disrupting the buses that will also be serving this Transitway.

Even assuming the streetcars will extend to Wayland Square or other points beyond Brook Street in the future. This third lane layover spot for streetcars will probably remain so that some service can terminate at College Hill. This third lane could also run straight through the Tranistway to give a limited number of buses a place to layover while allowing in-service buses and streetcars room to serve the platforms on either side. Allowing buses to layover outside of Kennedy Plaza is one of the reasons for having the sub-hubs afterall. 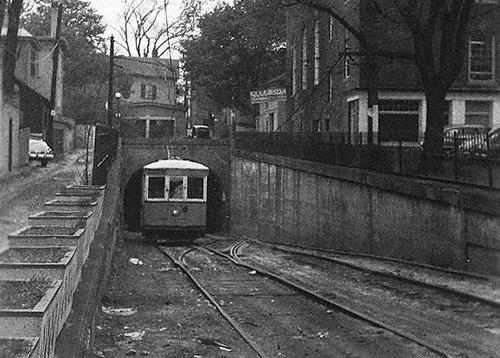 More grandiose time here. The other option is to re-engineer the portal to the current tunnel, so that it does not come directly to the surface at Thayer Street. Instead, keep the Transitway below grade from the tunnel portal, under Thayer, then ramp it to the surface between Thayer and Brook Streets.

This option includes the added expense of re-engineering the tunnel portal and tunneling under Thayer (which would be done via the cut-and-cover method). Having the platforms be below grade also introduces more ADA issues, however a ramp system should be able to be built rather than the expense of elevators. The strip plaza on Thayer Street would still need to be taken, but the house on Brook Street might not need taking, also room may remain available for some of the parking taken in the first option with access via an alleyway to Waterman Street.

Even without these takings, this is still certainly a more expensive proposition as it requires a large amount of engineering. The construction phase would be hugely disruptive to the area (though simply laying tracks on the surface will be disruptive too). Having the Transitway run below Thayer Street allows the transit to move smoothly without being impacted by pedestrians and traffic on the surface. The area above the current tunnel portal could also be engineered to support a new building above the Transitway. If the new structure were set back to line up with the curves of the buildings at the entrance to the tunnel, a small plaza could be created out front. Fones Plaza if you will. Currently Thayer is lacking a proper open space area where people can assemble. Think of “The Pit” at the subway entrance in Harvard Square in Cambridge and you get an idea of what a Fones Plaza could be like. 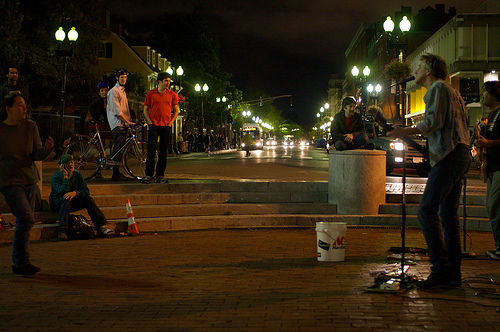 Both options move the transition from the tunnel to surface streets from Thayer to Brook Street. The traffic lights at Brook/Angell and Brook/Waterman would need to be coordinated to allow the transit movements out of Fones Alley to be accomplished without traffic backing up on Brook between Angell and Waterman. These same movements are done now at Thayer, though Thayer is one way making for less traffic movements at the tunnel portal. I don’t think these traffic movements are an insurmountable obstacle. Drivers would eventually get used to there being this traffic issue on Brook and move to Hope Street as an alternate route when possible.

So there are my proposals for a Transit Hub at Thayer Street. Thoughts? What do you think we’ll actually end up with?