We don’t often deal in rumors around here, but this one is too good to let pass. A member of UrbanPlanet UrbanPlanet posted that they had heard that representatives from The Hub were coming to Providence to check out the Arcade as a possible location.

The Bay Area Hub describes itself as:

The Hub is a coworking space, event series, and professional toolset for changemakers!

During the day, The Hub is a dynamic, collision-rich workspace designed by its Members and the wisdom gleaned from Hub communities throughout the world. Social innovators in the Bay Area are leaving their sterile offices, noisy cafes, and isolated living rooms to work alongside diverse peers in a professionally hosted environment. They choose The Hub because it’s where they find the access, tools, community, and inspiration they need to transform their ideas into action.

At night, The Hub transforms into an event platform for member driven
collaborations, lectures, screenings, innovation labs, and some of the most compelling and imaginative minds from around the world.

I have contacted The Hub to seek comment on their Providence plans (if any), but have not heard back yet. If/when I do I will update this post.

Remember, this is simply a rumor at this point. Feel free to speculate, anyone with more information feel free to add it. But true or not, what do people think of this as a concept for re-use of the Arcade? 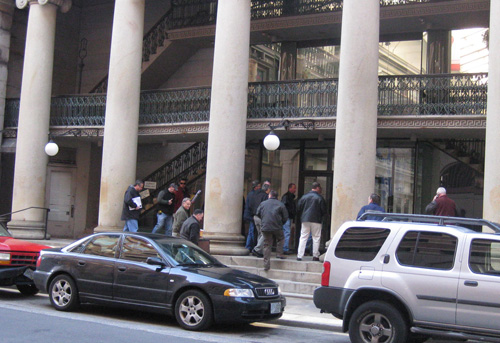 We’ve confirmed that representatives from The Hub are indeed in Providence this week and indeed looking at the Arcade. Thanks to our commenters for filling in some of the blanks. There are some issues to work out. Chiefly, The Hub does not require the entire space that the Arcade offers (the Arcade has about 20,000 extra square feet beyond the size of the largest existing Hubs). The Arcade owner has said they are seeking a single tenant for the building, The Hub will not be that single tenant, but it remains to be seen if The Hub leasing a portion of the building is enough to get the owners to re-open the ground floor to retail (which would be ideal in my opinion).

As pointed out in the comments by Dan, the EDC has been seeking this type of incubator space for entrepreneurs in Providence. If the EDC gets involved with this project, maybe there is something the EDC can do to help close the deal between what the Arcade’s owners are seeking, and the rent and space that The Hub can afford.

Seeing as The Hub is interested enough in Providence to make a visit; if a deal at the Arcade doesn’t work out, where would people like to see The Hub locate in the city?