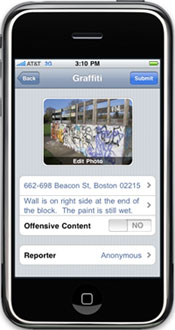 Well, there is in Boston anyway.

Boston’s Citizens Connect iPhone App utilizes the iPhone’s camera and GPS to allow city residents and visitors to report on issues around the city. The app helps people report things like graffiti, potholes, broken traffic lights and signs, and other items.

The city will be assessing the efficacy of the iPhone app, and plans to release apps for other platforms if it proves worthwhile. For those without an iPhone, the city has an extensive list of items residents can provide feedback on and ask for service on at the Citizens Connect page.

Meanwhile, in Providence we have the Office of Neighborhood Services page*. I’m sure some members of the knowledge economy could get together with some people in City Hall and create a system that blows Boston’s out of the water. I don’t know what ever became of the Qalert system.

Mayor Angel Taveras showed me the City's new iPhone App for reporting issues to the City.