CVS has responded to concerns about their proposed store in the Edgewood section of Cranston offering a “colonial” design alternative, which does not address many of the issues concerning the community, or taking 24-hours off the table. 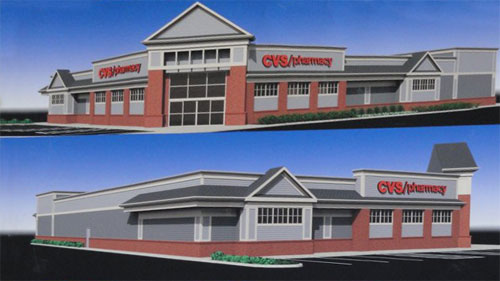 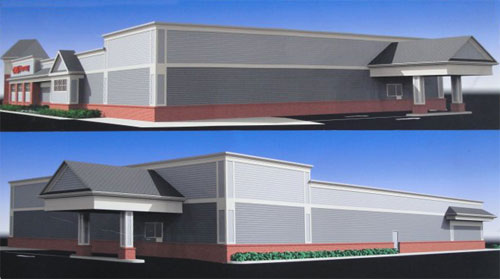 The above renderings (courtesy of the STOP CVS in the Historic Edgewood Neighborhood, Cranston RI Facebook page) represent the design consessions CVS is bringing to the table. This is instead of their typical beige dryvit box they plop down at most locations. This alternative design would also remove the large sign pylon (which would require Cranston zoning approval) and brings the landscaping and distance from neighboring properties in bounds whereas they will not need zoning variances.

According to an article in the Journal, company officials are also “considering” adding more windows and a pedestrian walkway across the 75-car parking lot.

OK, I have some harsh words for CVS in a second, but first, WHAT THE F*CK CRANSTON!? How in the world does your city’s zoning allow CVS to consider a pedestrian walkway? Like they can or cannot provide a walkway, whatever the hell they feel like, no big whoop. I’m well aware that Providence zoning is probably similarly weak (someone please cite for me where Providence requires pedestrian accomodations if it does so I can feel better), but I’m yelling at Cranston right now. Traffic is a problem that Cranston has, they are well aware of it, in fact the city is working on a traffic plan for the very intersection where this CVS is hoping to locate. Hey Cranston, you know a good way to fight traffic? ALLOW PEOPLE A WAY TO WALK IN YOUR CITY! My Maude, my head is exploding here!

OK, back to hating on CVS now.

You know what, CVS is a Rhode Island company, I really really really want to root for and be proud of and support local companies, but you know what CVS. I can’t. You suck. What is so hard about building this store to the street, providing pedestrian access, and creating a building that doesn’t look like a random box dropped down from space? This is your home. Why can’t you play nice? The Respect 4 Edgewood people aren’t being unreasonable.

I walk down the street to my local Walgreens on Atwells Avenue which is in a mixed use building, built to the street, with parking on the side partially shielded from the street and I’m happy to support this national chain. I like Walgreen’s, I feel warm and fuzzy about it because they built a nice store in my neighborhood. They didn’t feel the need to destroy the chracter of Federal Hill with a massive parking lot, and a huge ass sign, and drive-thru lanes wrapped around the damn building.

Yes, Walgreens went and did in Edgewood exactly what CVS is trying to do now, if I lived in Edgewood, I wouldn’t be feeling warm and fuzzy about Walgreens. CVS has a chance to poke Walgreens in the eye in Edgewood. They could either do what they are trying to do, create the same dreck that Walgreens did across the street. Or they could embrace the desires of their neighbors and create something that will create brand loyalty.

In the ProJo, CVS says this:

The so-called backup plan would reduce the store’s footprint to 10,000 to 11,000 square feet, [CVS spokesman Michael J.] DeAngelis said. “And because it’s a smaller store, we’d have less of a budget,” he said, “so we would not be able to include all the architectural flourishes and significant landscaping” of the other proposal.

I call Bullshit. Right here, I’m calling it, BULLSHIT! See the renderings above, those are the architectural flourishes they are saying they can’t afford with the “fancy” store.

Second, you have the drawings right there. In fact, I’ve been to that store, in dozens of communities across the region. I’m sure they have a set of plans for various conditions they just pull out of their ass and puke onto a parcel in a random town. There’s no budget? That looks like “10,000 sq. foot corner lot Cape Cod Style with brick.” Wasn’t that on someone’s hard drive and printed out an hour before the meeting?

Third, you are ranked 18 on the Fortune 500. You can’t afford some design work? Really? How many stores do you open a year? Don’t you have architects on staff? Really?

Fourth, you can’t afford significant landscaping, Really? Number 18, Fortune 500. I ask, why do you hate Rhode Island? I seriously don’t understand. I’m not a business person, maybe I need a clue, I know there are bottom lines to be met, but do you really think your customers, your neighbors, don’t deserve better than this?

This is Respect 4 Edgewood’s take on the matter from their Facebook page:

CVS basically said that if residents back off, we can have the ‘prettier’ bldg & CVS won’t seek 24hrs AT THIS TIME. If we continue to fight them, CVS will build the original cheap ugly box AND pursue 24hr operation. Not like this new design is that much better. Still doesn’t address traffic issues at that dangerous intersection, still has sea of asphalt out front, still looks like Hoxie4Corners….

CVS, I know you can do it. Look at the Providence Place location. It is lovely, and you didn’t make the mall knock down Macy’s so you could have a parking lot. Come up to Federal Hill to see the Walgreen’s we have here. It may not fit into your assembly line way of plopping down stores willy-nilly, but let me tell you, this is the future.

Sure, I’m the no-car owning, walk everywhere, ride the bus weirdo, but my ranks are growing. People are looking for community, for places where they can walk, for not having to depend on their cars and oil (the foreign or gushing into the Gulf variety), for not having their neighborhood look like every other neighborhood on the planet. Walgreens sees the writing on the wall, they just bought Duane Reade giving them a big foot into the urban marketplace.