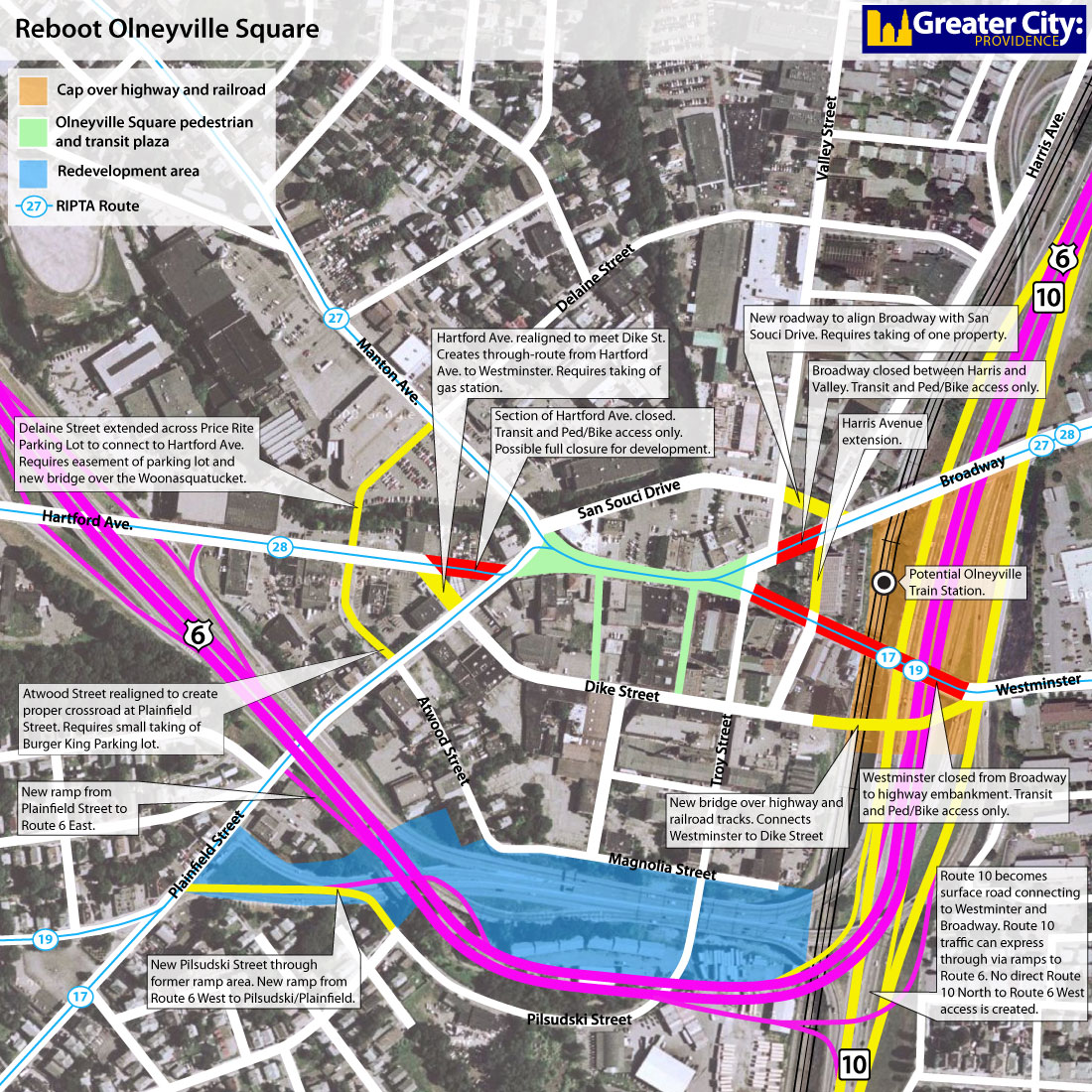 [box style=”red”]REBOOT is an occasional series of posts on GC:PVD where we identify areas of the city that display poor urbanism and propose ways to improve them. Our interventions may be simple and quite easily realized, or they may at times be grand and possibly take years or decades to complete. Either way, we hope they generate interest and discussion.[/alert]

As the Iway project winds down, one of the next big planned highway projects in Providence is the Route 6/10 interchange in Olneyville.

Much like the Route 195 relocation, the Olneyville project is necessary due to the age of the structure. The bridges and viaducts have reached the end of their useful lives and need to be replaced. Also, RIDOT seeks to complete the missing connection from Route 10 north to Route 6 west.

Unfortunately, the website RIDOT had set up to explain the different alternatives for this project is no longer active. The basic plan would be to move Route 6 slightly south onto the National Lumber and First Student Bus Properties (which they were not happy about). This would allow the existing viaduct to be torn down and provide room to make that missing north/west connection.

The REBOOT proposed here is more to do with reconnecting Olneyville Square to Federal Hill and the West End, and focuses less on Route 6/10 (though they get extreme makeovers in this plan too). My plan does not create the missing north/west connection, but with some more noodling of the plans, I’m sure it could.

The key to this REBOOT, is closing down Olneyville Square to traffic, and turning it into a pedestrian and transit mall, with some substantial rerouting of area streets to move cars about the area, without moving them through the square. Of course anyone familiar with Olneyville Square will know, currently traffic doesn’t really move through the square very well. I think the technical term is clusterf*ck.

So let’s work through some of the pieces of this plan.

As stated, the square proper is closed to traffic, allowing only buses (and eventually streetcars), pedestrians, and bicycles. Some of you old timers may be remembering the pedestrian mall on Westminster Street and will blanche at such an idea. The pedestrianization of Westminster Street didn’t work. Correct, it didn’t, but it may have been an idea before it’s time, and the pressures of suburbanization that were emptying Downcity were just too strong. Olneyville is a different beast though.

As of the 2000 Census, over 40% of the households in Olneyville did not own an automobile. Also, only 3.4% of the people living in Olneyville, work in Olneyville. So these carless people who work outside the neighborhood are much heavier transit users than the city as a whole.

Currently the buses get stuck in the same horrendous traffic that everyone else gets stuck in. Removing cars from the square allows the buses to move through the area fast to better service that 40% of households that lack access to a car.

Pedestrianizing the square creates more space for retailers to sell their wares on the sidewalk and creates a much more user friendly business district in the square. The fast and frequent bus service will potentially attract people from other parts of the city allowing Olneyville Square to again become the western retail and business anchor for the city.

The Route 6 Tunnel and the Southern Bypass 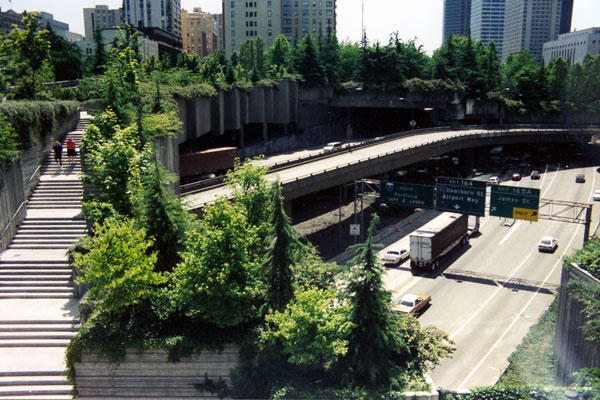 Seattle’s Freeway Park, built on a deck over Interstate 5. Photo from the City of Seattle.

In this plan, Route 10 from the south would rise up to the level of Broadway and Westminster and become a surface street. Ramps would allow it to connect to/from Route 6, which would go in a cut below street level which could potentially be covered and developed. This would close the wound that the highway currently creates separating Olneyville Square from the West End.

The existing section of Westminster Street from around about where the Skurvy Dog is to where it currently intersects Broadway would be closed and reserved for bus/bike/ped traffic only. Westminster would be re-routed to a new southerly location and connect to Dike Street, creating a southern bypass of the square to Plainfield Street. A small realignment of Hartford Avenue would allow traffic on this southern bypass to flow directly onto Hartford Avenue, and eventually onto Route 6. All without the current traffic congestion in the square. The realignment of Hartford Avenue requires the taking of a gas station currently at the corner of Hartford and Plainfield.

Broadway travels over Route 6 on it’s current path, but gets diverted onto a new roadway at Harris Avenue. This new roadway connects Broadway to San Souci Drive and diverts traffic north of the square. The new roadway requires the taking of one or two properties.

A new portion of Harris Avenue is created in front of the housing highrise to allow for through traffic from Harris Avenue directly to Dike/Westminster Streets.

The Price Rite Plaza present a spectacular redevelopment opportunity in the heart of Olneyville Square. With the number of buses passing through Olneyville Square it is a fantastic location for Transit Oriented Development. Redeveloping the store and it’s parking lot for housing and jobs will put people steps from the major transportation hub.

Delaine Street would be extended through the Price Rite parking lot and connected to Atwood Street. This connection creates a half ring road around Olneyville Square which will further keep through traffic out of the center of the area.

The owners of the Price Rite Plaza would have to agree to pushing the road through, and a bridge would need to be built over the Woonasquatucket to allow the connection to Atwood Street. 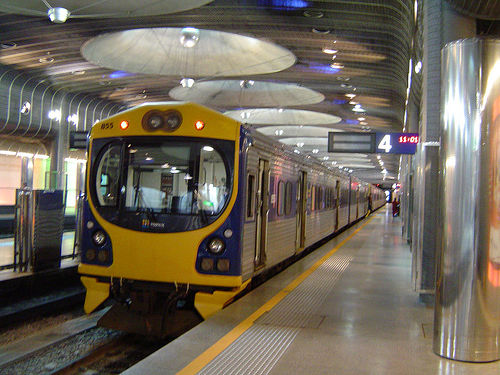 Broadway is an obvious candidate for future expansion of Providence streetcar service. The transit mall at Onlyville Square makes that service even more attactive and the development potential in the immediate area means that such streetcar service could be a strong economic generator.

This may all seem like a lot of work, and well, it is. But aside from the extreme engineering of moving the highway and possibly decking it over at the east side of the square (and the train station and streetcar), it is really simply a collection of smaller interventions. And the extreme engineering of the highway is happening regardless. So while we get ready to put focus back on this highway project again, isn’t it a good time to start to ask how the highway project can benefit the neighborhood?