Update 07/11/2012: Amtrak has released an updated vision for the Northeast Corridor which happily does not by-pass Providence. Read the report. (.pdf)

Amtrak released A Vision for High-Speed Rail in the Northeast Corridor [.pdf] today. The Vision is as of yet unfunded, would not be complete until 2040, and the alignment analyzed for this report would by-pass Providence (there’d be a station in Woonsocket though). 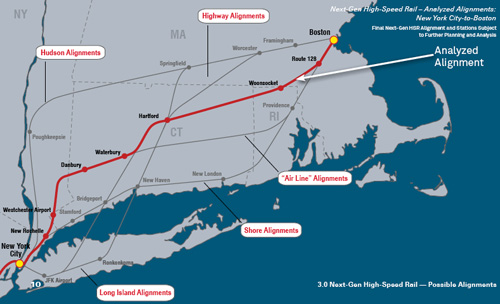 A number of possible alignments were initially analyzed for their potential to meet these goals.

In the New York City-to-Boston segment, the study team examined a variety of potential alignments, including a “Shore Alignment” paralleling the existing NEC; a “Long Island Alignment” heading east of out New York and traversing Long Island Sound; and “Highway” alignments paralleling all or portions of major interstate highways, including I-84, I-90 and I-91, through Connecticut and Massachusetts. It is important to note that virtually all of the alignments considered pose a variety of construction and environmental challenges. It was beyond the scope of this study to analyze all potential alignments in significant detail. However, a representative alignment was chosen for analytical and costing purposes. This “Analyzed Alignment,” as shown in the figure, parallels the existing NEC from New York to just north of New Rochelle, then follows a combination of highway, rail and overland routes through Connecticut and Massachusetts, before rejoining the existing NEC south of Rt. 128 in Massachusetts and paralleling it into Boston. A route substantially paralleling the existing NEC between Boston and New York was not chosen for initial analytical purposes because of a combination of capacity constraints on MetroNorth’s New Haven Line between New Haven and New Rochelle. Curvature restrictions and design requirements to meet environmental concerns on the Amtrak-owned “Shore Line” from the Massachusetts state line to New Haven would make it extremely difficult to meet the travel time targets of approximately one hour and 30 minute service.

Now, this is a preliminary report, and nothing has been engineered or officially picked yet, so it is not exactly time to panic about being bypassed. Also, this is a plan for a 240mph corridor between Boston, (Woonsocket??), New York, and Washington, plus other cities; highspeed rail of somesort, just not as fast, would still run between Boston, Providence, New Haven, and New York City. 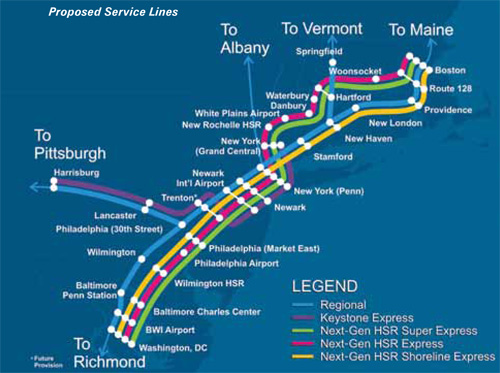 However, it is never too soon for our Governor, Mayor, Congressional Delegation, and everyone else to start working to ensure that we’re on that line.

If the highspeed line were routed south to Providence then west to Hartford it would finally establish the mythical Providence-Hartford connection that was canceled out of the Interstate Highway plan.

Thinking about how a line to Hartford would branch off our current section of the Northeast Corridor (presuming that the existing Providence Station would be our highspeed rail station), a branch along Route 6 out of Olneyville makes sense as the starting point for the Providence-Hartford line. This Next-Gen Highspeed route is still 30 years from reality, but we should not do anything now to preclude it. As we look toward re-engineering the 6/10 interchange for example.

Nothing against Woonsocket, but if we’re going to lay new track (which is what this plan calls for) between Boston and Hartford, it would be ridiculous for it to serve Woonsocket, but not Providence.