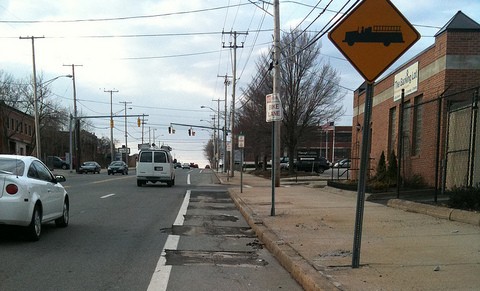 Friday’s record breaking temperatures and last weekend’s ride on the bikepath had me pretty psyched to get an early start (for me) to the bike-commuting season. As you might expect, the roads are in tough shape. The potholes and sand made for a pretty tricky ride. At minimum, half the width of all the bike lanes along my route were full of sand and debris, and, in some places, craters left from utility repairs. Even so, it was great to be out there again. I took it at a very leisurely pace. I tell myself it was so that I’d be prepared to stop or swerve from the obstacles ahead, but after a lazy off-season, I’m not sure my body would have propelled me much faster anyway.

As I made my way down Allens Ave (yes, still going that way…), I felt as though I was being teased by the smells of home fries wafting from the Seaplane and OV’s diners. Though, my appetite was soon lost as I biked past a dead bird in the road.

I’m pleased to report that cars and trucks sharing the road with me offered not a single honk. On a narrow side street towards the more industrial Jefferson Blvd, I approached a blind corner while a small truck was approaching from behind me. I had little choice but to take the lane and prevent him from passing me. After the turn, I moved over to the side letting him by. As he passed, I offered a wave of thanks, and he responded with a kind doot-doot of “you’re welcome.”

As I get closer to my office on Jefferson Blvd, the only safe place for me to ride seems to be on the sidewalk, much to my chagrin. Somehow, this sidewalk has accumulated a significant amount of sand. Seems strange since not a single shovel graced these sidewalks all winter long.

Today’s lesson: when riding a road bike through a patch of sand, don’t even consider tapping the breaks.

I had hoped to take advantage of the warm weather and bike home as well. Unfortunately, the strong headwinds with gusts forecast up to 40mph scared me into carpooling home with a coworker.
I’m looking forward to my next rides. Last year, I commuted at least one day a week by bike (13 miles each way) from April through October. I’m hoping that this year, I can bump that up to at least two.

Photo (cc) Practise The twelfth highest rate of single occupancy automobile commuters, doh! According to a new Census Report more than 80% of Rhode Island workers commuted to work in single occupant vehicles (in 2007...