Why oh why do we have to have sidewalks on Federal Hill?

Nice headline, huh? OK, we need sidewalks certainly, but why do we have sidewalks along the alleys that thread between buildings in the Atwells Avenue area? Writing the post on the 50 Cedar Street proposal had me zooming down Jones Street via the Google Machine.

Check out the sidewalks on Jones Street: 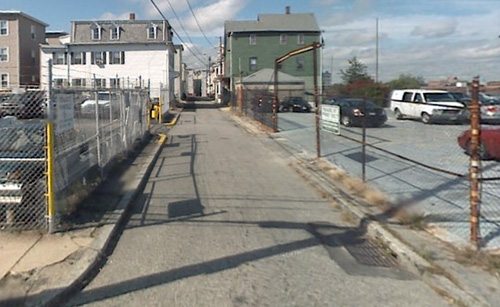 What is even the point of those sidewalks? Is someone in a wheelchair supposed to find those sufficient, someone pushing a stroller..? Federal Hill is littered with these alleys with these substandard sidewalks. Why are we trying to force a roadway, curbs, and sidewalks into a space where they just won’t fit?

I’m all about seeing the alleys on the Hill transformed into Woonerfs. A Woonerf is a Dutch traffic calming concept where controls are removed and all road users share the space equally. On a street like Jones Street, that connects nothing to nothing and has almost non-existing vehicular traffic, it seems a no brainer to remove the sidewalks and make the road one open space. Some safety measures such as strategically placed bollards would be employed to keep cars from ramming into buildings, but otherwise, just let all users mingle.

I live on one of these Federal Hill alleys and no one uses the sidewalks, so why have them?

A Woonerf can even be green. Woonerfs typically have pavers to make them look different from a regular paved street. The pavers give a cue to the driver that this is a special place and that they need to pay attention to other users. Those pavers could allow portions of the roadway to have a permiable surface, allowing rain water to soak into the ground, rather than running off into drains and eventually the rivers and the bay.

Areas previously reserved for the pathetic sidewalks we have now could be populated with strategically placed bioswales which would collect more rain water to soak into the ground. The bioswales would need to be placed in such a way as to ensure that the water soaks into the ground and does not pour into people’s basements of course.

We’re of course in a fiscal crisis, and rebuilding little used alleys is likely not on the table for a while. On Federal Hill, most of the alleys are simply linear potholes and they will have to be rebuilt at some point. When that time comes, we should consider Woonerfs rather than trying to jam a typical street into an area that cannot support that kind of infrastructure.

Westminster Street, Downcity. Photo © kd1s. A reader wrote in to suggest this topic, what is your favorite street in Providence, and why? I must admit, when I first read his suggestion, my mind drew a total blank...