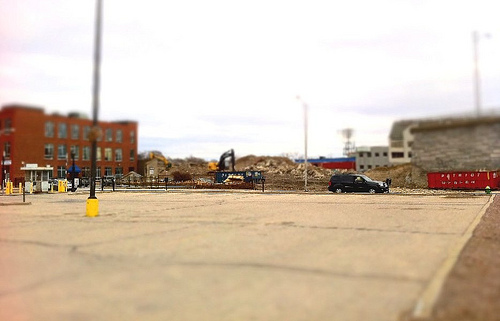 News on legislation at the State House to decide how the Route 195 land freed up by the relocation of the highway has been moving swiftly today. So swiftly it is hard to keep up. Forgive me as I drop some links instead of write my own post about it.

The governor would appoint four members and the Providence mayor, three, according to legislation introduced Thursday by Senate Majority Leader Dominick J. Ruggerio, D-Providence, at a hearing of the Senate Committee on Housing and Municipal Government.

Until now, Providence Mayor Angel Taveras has expressed skepticism about the idea of creating a powerful commission with authority to determine how the land is sold and to whom.

The committee voted to continue its hearing until Tuesday, after a few speakers said they had not had the chance to read it. The legislation was kept under tight wraps until the hearing began. The bill received support from the Chafee administration and a private developer.

Ian Donnis over at WRNI expands on the ProJo’s reporting, Concerns grow on Ruggerio bill for reuse of I-195 land and highlights the fact that the Senate Committee on Housing and Municipal Government, which is reviewing the legislation, sent out an online notification this afternoon that the bill would be voted on by that committee on Tuesday afternoon. Gee, thanks for the late notice on a Friday before the holiday weekend that an important bill will be voted off the day after the holiday weekend.

Be sure to click over to WRNI to read Ian’s post which includes some concerns about the legislation expressed by John Marion, the executive director of Common Cause Rhode Island.

The Bill can be found here [.pdf]