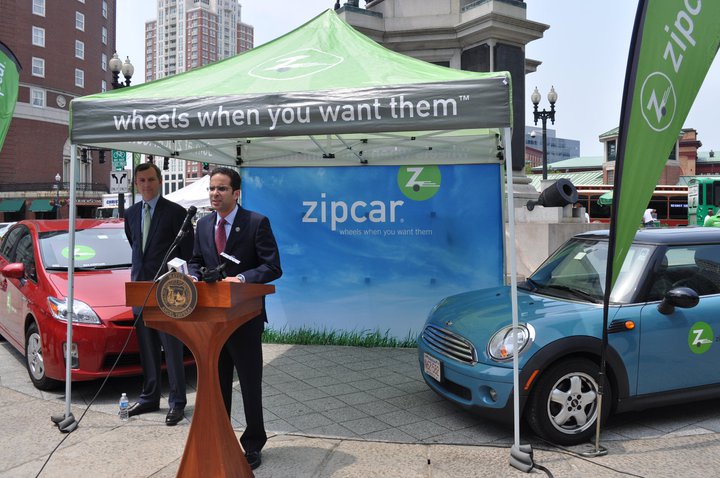 Photo courtesy of City of Providence

The City of Providence and Zipcar announced today that the car share company will open an office in the city and expand it’s fleet of vehicles here.

The car sharing company started several years ago offering several cars to members of the Brown University community. Recently it has expanded to serving both RISD and Johnson & Wales and also has several cars located at the Biltmore Garage (formerly the Parkade) on Washington Street.

With the companies expansion into the Providence market, cars will now be available on Exchange Street near the train station, Traverse Street north of Wickenden, and South Main Street near Power Street. The company will be looking at other areas with high foot traffic to locate vehicles. The fleet will include, Honda Civic, Toyota Prius, Nissan Sentra, Toyota Matrix, Scion xB, Honda Insight and others.

“Providence’s partnership with Zipcar is a significant step towards our goal of providing a greener and more sustainable environment for our residents. It is also a great example of increased business expansion into Providence and a boost to our local economy through job creation,” said Mayor Taveras. “Zipcar is already popular with the Providence community through its program with local universities, and we believe that by expanding the availability of car sharing throughout the city, we are providing convenient transportation options that will not only reduce the city’s demand for parking, but also aid in reducing harmful emissions.”

In addition to memberships for individuals and Universities, Zipcar also offers a “Zipcar for Business” (Z4B) program, which currently has more than 10,000 business accounts. Zipcar will launch the Providence program with Blue Cross & Blue Shield of Rhode Island, the state’s leading health insurance provider and Rhode Island Housing, the state’s leading resource for housing needs, as two of the first Z4B programs in the market. Z4B is targeted at helping businesses save money, meet environmental sustainability goals and reduce parking requirements by providing their employees with access to Zipcars for business meetings and more.

I maintain, that a robust car-sharing network is what we need in Providence before a bike share network. Providing the means for people to gradually transition away from car-ownership (or second car-ownership) makes people more willing to investigate other transit options.

Say a family gives up their second because they have acces to a car share. Now that they no longer have that second car, they may also now consider walking, riding their bike, and using public transit. And now that they’ve reduced their dependence on their car, they become an advocate for alternative means of transportation.

Personally, I’ve been a member of Zipcar since last year, but I have not yet used the service. I’ve needed cars for longer periods to go longer distances than is economical for Zipcar. It is really built for short trips. Has anyone else used Zipcar? How has the experience been?

Join Mayor Angel Taveras and the City of Providence on Sunday, August 17 for a car-free event that will open up Broadway for walking, skating, running, cycling and exercise. Free and open to the public! Featuring Zumba...

Photo from Zipcar There was a lot sturm und drang across the internets yesterday as it was announced that Avis plans to acquire Zipcar for approximately $500 million. My personal initial reaction was, yay, those are the...