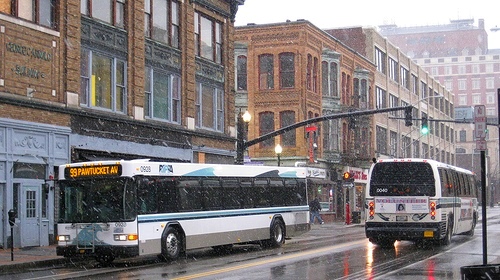 In order to cover a projected budget deficit and in response to the budget proposed by the General Assembly, RIPTA CEO Charles Odimgbe says RIPTA services will need to be cut by 10%.

Odimgbe quoted in the ProJo:

“I’m really very frustrated,” he told the authority board of directors. “I don’t know what else to do.”

“Seventy percent of our riders take the bus to work,” Odimgbe said. “That’s what’s so frustrating.”

I mean what is there more to say? While the Assembly was working hard to make sure we all call a Christmas Tree a Christmas Tree, the Coalition for Transportation Choices had a full legislative agenda to address the annual budget shortfall at RIPTA (and at RIDOT).

It is not like the budget shortfall should be a surprise for the Assembly, from my post last year, here’s the gist of the problem:

The CTC’s legislative package addresses this. The Assembly doesn’t even have to do anything, they just need to stop talking about Christmas Trees for a minute, pull their heads out of their asses and vote.

That’s me, I keep writing this post every year and keep expecting the Assembly to pull their heads out of their asses and address this, and they keep keeping their heads in their asses.

Clearly, I am the one who is insane.

All local in today's News & Notes; Netroots coming to Providence in 2012, firefighter contract deal close, good news in the state budget for Providence, and more.