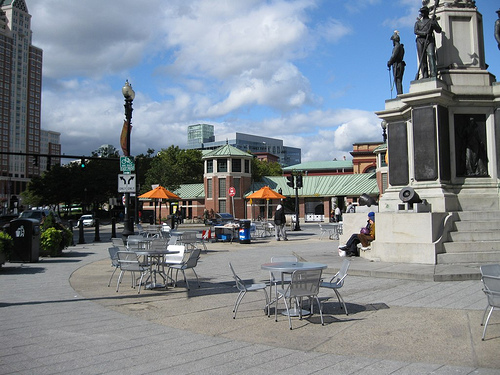 One of only 51 Our Town grants awarded nationwide, the NEA award will be used to create high-quality arts programming at Greater Kennedy Plaza and bring together major stakeholders to create a detailed master plan design for the space.

Providence’s Creative Capital Hub Project brings together 17 arts and business partners to creatively address improvements to Greater Kennedy Plaza. The activities of the grant include collaboration with FirstWorks, designing a new stage by Providence’s Tony Award winning set designer Eugene Lee, and raising the quality of artistic programming on the plaza with local and national artists. The Department of Art, Culture + Tourism will administer the grant.

“The City of Providence and RIPTA have been working with the Greater Kennedy Plaza coalition to develop a plan to transform Greater Kennedy Plaza from a transit hub to a great public space. This grant will tip the scales in our fundraising efforts and allow our city’s exceptional arts organizations to contribute to the development of our city’s central square,” said Mayor Taveras.

Among planned programming for Greater Kennedy Plaza, the Brown University/Trinity Repertory Company Consortium will produce Shakespeare; and AS220, The Steel Yard and City Arts will contribute public art works. Additionally, Waterfire, the Rhode Island Philharmonic and Festival Ballet will work with the coalition to create public presentations in the summer of 2012.

More information from the City of Providence.

Programming has been underway for a while in the Plaza area including Beer Garden Thursdays in Burnside Park (I’m usually there), the Farmer’s Market on Fulton Street, and more.

Personally, I’d love to see programming extended beyond the Skating Center in winter and have already made it known that I think a Raku Rodeo (or better yet, Rodeos) would be awesome. What kind of programming would you like to see in Kennedy Plaza?