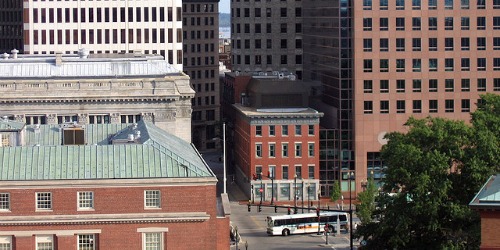 The proposals would reduce the frequency of service on 13 routes, mostly in the evening, and bring a variety of other schedule changes and reductions to save slightly more than $1 million.

The proposals would also eliminate 32 jobs, including 13 maintenance positions, 9 supervisory positions and 10 administrative positions, saving $1.4 million. Some work, such as plowing snow and doing other clean-up tasks, would be outsourced. But some workers would be laid off.

Oh, and Congress may reduce money that RIPTA gets from the Feds by 30%. From RIPTA:

Safe and Reliable Public Transportation is at Risk!

Congress has proposed to cut more than one-third of federal funding across the board for public transit and surface transportation programs. If these cuts are implemented, transit riders can expect service delays, fare increases and over-crowding.

The proposed cuts to funding will increase unemployment and leave many Americans stranded without access to their jobs and basic services such as grocery stores, doctors and faith services.

Show your support on Tuesday, September 20, 2011 by wearing red and/or attending the Don’t X Out Transit Providence Rally in Kennedy Plaza, in front of City Hall, at 10AM. RIPTA bus drivers will show their support by wearing red “Don’t X Out Public Transit” t-shirts.

How Will RIPTA be Affected if Congress Makes These Cuts?

The following programs would be cut by 1/3:

Schedule of public hearings on RIPTA service reductions and list of services proposed to be cut.