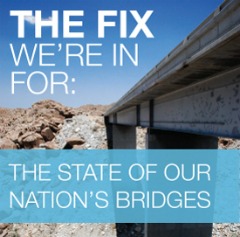 Transportation for America released a report today on the state of our nation’s bridges. Hint, the news is not good.

On the heels of the sudden closure of a major commuting bridge in Louisville, KY, a new report shows that more than 18,000 of the nation’s busiest bridges, clustered in the nation’s metro areas, are rated as “structurally deficient,” according to this new report from Transportation for America.

In Los Angeles, for example, an average 396 drivers cross a deficient bridge every second, the study found. The Fix We’re In For: The State of Our Nation’s Busiest Bridges, ranks 102 metro areas in three population categories based on the percentage of deficient bridges.

The Providence Metro area (which includes the entire state of Rhode Island plus Bristol County, Massachusetts) ranked third worst of metropolitan areas with a population between 1 and 2 million. 18.6% or 212 of our bridges were ranked as deficient with a daily traffic count of 3,933,150 on deficient bridges.

In order to prevent future catastrophes on our nation’s roads and bridges, the report recommends that Congress should:

The number that “The State of Our Nation’s Busiest Bridges” uses for the Providence metro area also includes bridges in New Bedford and Fall River, Massachusetts. Statewide, Rhode Island has 155 bridges that are classified as structurally deficient. The report lists 212.

I don’t know what RIDOT is not understanding, the report clearly stated it was ranking by metro area, which for Providence includes the entirety of Rhode Island plus Bristol County, Massachusetts (home to New Bedford and Fall River). That is where the report gets 212 deficient bridges from.

In the state report [.pdf], which includes only the state of Rhode Island, not Bristol County, MA, there are 163 structurally deficient bridges. I cannot account for the descrepancy between RIDOT’s 155 and Transportation for America’s 163.