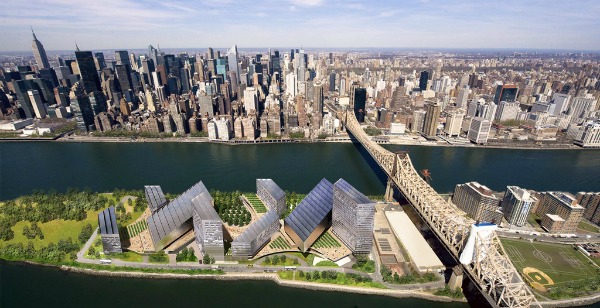 Proposed Cornell University and the Technion-Israel Institute of Technology campus on Roosevelt Island in New York.

Inside Higher Ed: The Lure of the City

Cornell, one of the only top private research universities in the country not located in an urban area, saw expansion into New York as a necessary component of its future ambitions and was willing to go to greater lengths, invest more money, and better conform to what the city wanted, officials said.

The competition helps cement the idea research universities have been pushing in recent years that they can serve as economic engines to local communities and the country as a whole, and could spawn a host of similar initiatives in other cities.

It also reinforces a growing notion that research universities are going to need access to the resources provided by urban areas to continue to serve as such engines. “We believe the city had the right idea at the right time,” Cornell President David Skorton said at the announcement. “The tech sector of universities is shifting from simply the pursuit of knowledge to service of business and industry.”

Transportation for America: Congress fails to keep the transit benefit from being slashed at the end of the year

Unfortunately, the Senate’s extension of the payroll tax cut did not include a provision for keeping commuter tax benefits equal, so at the end of the year, the transit pre-tax benefit will be cut in half, and the parking benefit will be increased $10 to $240 to nearly double the amount of the transit benefit.

During an afternoon news conference, Chafee introduced Carole A. Dwyer as the new interim administrator of the DMV.

Dwyer, who was most recently warden of the Intake Service Center for the Rhode Island Dept. of Corrections, will replace current interim administrator Lisa Holley.

There’s some joke to be made somewhere about her last job being at the ACI intake center. Also, are all the DMV Directors “interim” for a reason? Is it just assumed that they will hate it and leave?

A Discussion with James Howard Kunstler When Wednesday, April 1 6:30-7:30 Where Metcalf Auditorium at the Chace Center/RISD Museum 1 Learning Unit Cost $10 for AIA Members / &15 for Non-Members / Free for Students...