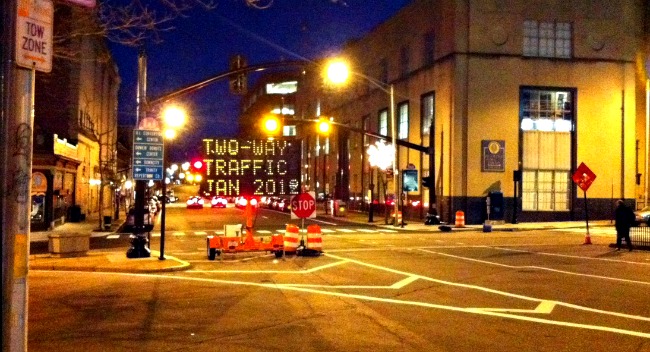 Update: Two-way traffic to begin Tuesday morning, January 10th before the AM commute. See Press Release in the comments below.

Signs are up on Weybosset and Empire Streets alerting drivers that those streets will become two-way in “January 2012.” When exactly in January, it doesn’t say.

My understanding is that the final striping and signage and such to convert the streets will be put in place on a Saturday and Sunday morning, Ta Da!, two-way streets. I can’t imagine that work will take place on New Year’s Eve, so I’m speculating we have at least another week to go.

This is of course all part of the Downtown Circulator Project which got underway in April, and was due to be completed in November, oops!

The rebuilt intersection of Weybosset, Richmond, and Mathewson Streets, aka PPAC Square, is also part of this project.

If previous plans hold true, work should begin next year on Phase 3 of the Circulator Project which will include the redesign on Emmett and LaSalle Squares, conversion of Sabin Street in front of the Convention Center to two-way traffic, and the possible two-way conversions of Exchange Terrace and Dorrance Street between Washington Street and Emmett Square.