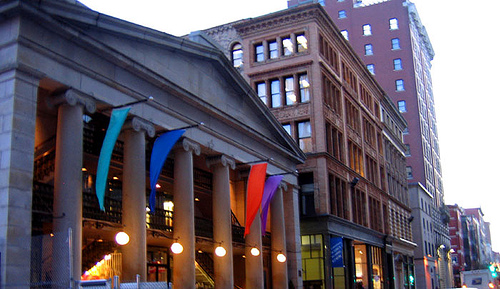 Rumors have been swirling about the Arcade since, well probably since 1828 when it was built, but certainly since 2008 when Granoff kicked out all the retailers and closed it.

I’ve heard all manner of stories about the place over recent years but haven’t written about any of them because I’m very much of the “I’ll believe it when I see it,” opinion. The rumors however are ramping up now with GoLocalProv reporting about it earlier this month and PBN reporting on it today, and a special event scheduled for Wednesday with the Mayor and Governor attending. So, the noise has risen to the point where I must write about it.

The plan according to information gathered by GoLocalProv and PBN is to re-open retail on the ground floor and convert the 2nd and 3rd floors to residential uses.

First. Was it necessary to kick out the retailers and close the joint for 4 years in order to build apartments on the upper floors? Sure, there are costs to having the building open, but there were rent paying tenants and those tenants had customers (myself among them). Whatever, I’m always first to admit that I’m not an economist, maybe closing down made the most sense for the owners. So, yay, they’re going to re-open it.

However, multiple sources with knowledge of the plans told PBN they will include more than 40 small apartments in the second and third floor spaces that used to be occupied by shops. The apartments, which will not have full kitchens, will be targeted to young people and professionals looking for a small space to stay downtown while on business.

People, I lived in New York (yes, I’m cool like that), we call an apartment without kitchens for “young people and professionals looking for a small space to stay downtown while on business” a pied-à-terre.

While it is not the definitive source for information, Wikipedia describes a pied-à-terre thusly:

A pied-à-terre (French, “foot on the ground”) is a small living unit usually located in a large city some distance away from an individual’s primary residence. It may be an apartment or condominium.

The term pied-à-terre implies usage as a temporary second residence, either for part of the year or part of the work week, by a person of some means.

I love Providence, I’m one of its biggest boosters even as I point out how the sidewalks are unshoveled and other grave problems, but really, I love it. But does anything in that definition sound like Providence? “Large city?” “Some distance from primary residence,” some distance from East Greenwich? “Person of means?” This is not Providence, I’m sorry. For the few people who are of means and can’t be bothered to drive to East Greenwich every night we have a nice collection of lovely hotels without kitchens for them to stay in.

When GTECH moved to town, and when they got bought by Italians there was some talk of them building a hotel in Capital Center to host Italian executives and other out of town guests, but they decided they didn’t need (could not afford to build) an entire hotel, so they have arrangements with existing hotels. I’m sorry, I see no market for pied-à-terres in Providence. As much as I would like for us to be that city, we are not.

Back to the rumors, one I heard for a while was dorms. What are dorms? Apartments without kitchens. I leave you to connect your own dots.

You may notice I’ve changed the name of this post, “cautious optimism” is what I’m feeling about this project now, I have some concerns and a few minor unanswered questions, but if this is successful as proposed it will be good for the building and good for the city (and presumably good for the developer as well).

It is not a strict historic renovation of the building, and as such, there are concerns. Obviously it is no longer 1828, needs change, technologies change, I’m not a wrapped in amber preservationist, but I don’t want to see changes too far alter a structure, especially if those changes would be hard to change back if need be.

As far as changing though, the proposed changes are much better than the original proposal to find a single tenant for the building which could have resulted in far greater degradation of the historic interior. From what I’ve heard talking to people yesterday both online and in person, there will be some very great restoration of the ground floor back to more of what existed in 1828 versus the mid-20th century renovations that exist today. As this will be the public face of the building, these renovations are most welcome.

The upper floors have always been the hardest to deal with from a real estate development perspective, and this is where it not being 1828 anymore comes into play. The proposal maintains the atrium of the building up through to the roof, happily, there is not proposal to install floors over the atrium to expand either of the upper floors. As for the treatment of the interior facades on the upper floors, it is not clear to me yet how those will be handled.

The good news also is that Granoff is a known entity. He is accessible to the community, he is a member of the community, he’s not some faceless developer with an office in Fort Meyers or something. If anything about the stewardship of this building goes off the rails, we can find him and express our concerns about it to him. And though the closing of the building and the ending of retail leases in 2008 may have been an unpopular move, Granoff has taken great care of the building over the time it has been vacant ensuring no harm has come to it, more than can be said for many (most?) other vacant buildings in this city.

Photo by Jef Nickerson We don’t often deal in rumors around here, but this one is too good to let pass. A member of UrbanPlanet UrbanPlanet posted that they had heard that representatives from The Hub were coming...

ProJo: The Arcade, the nation’s oldest indoor shopping mall, closed to the public this morning as its owners are preparing to transition the downtown landmark, which in recent years had been home to a handful of...