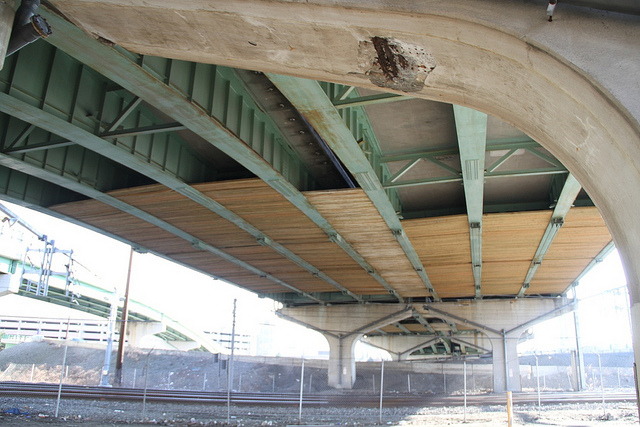 Underneath the Providence Viaduct. Photo © RIDOT

The draft 2013-2016 RI Transportation Improvement Program (TIP), a plan to spend about $1.1 billion, has been released by Statewide Planning. In print, it is at least 120 pages! This is because it includes a description of the process, analysis of financing, environmental justice, air quality, its various program components (such as bridge, Interstate, transit, safety) and a detailed compilation of the various funding sources. Despite some uncertainty about future legislation, it essentially assumes level Federal funding.

Some highlights that may be of interest: it does propose funding for the Providence Viaduct replacement on I-95 (eventually about $150 million); the bike/pedestrian bridge in Providence on the old I-195 piers ($6 million); Blackstone Bikeway expansion, in Woonsocket, but also in Providence where there is an opportunity to use a Bay Commission right of way between East Side Market and Gano St ($6.5 million); the Apponaug bypass in Warwick ($27 million); and reconstruction of sections of Routes 5, 6, 138 ($36 million.)

In the transit section, RIPTA projects replacing 72 of its 238 buses ($36 million) and modest improvements in passenger facilities and administrative structures. However, its key need is for operating funds as a $10 million operating deficit in 2013 looms. On the rail side, funds are programmed to support the south county commuter rail extension (about $8 million/yr,) to design a commuter rail stop in Pawtucket ($5 million) and to study commuter rail potential in the Blackstone Valley ($1 million.) Design of the proposed Providence streetcar is allocated $1.5 million, not nearly enough to do this, so it needs an additional funding source if there is to be any further progress.

Projects not recommended for funding (some still listed for “study and development”) at this time include work on the Route 6-10 bridges in Olneyville, reconnecting Westminster Street, a southbound rest area on I-295, new ramps on Route 403 and for connecting I-95 southbound to Route 4, another Henderson Bridge rehab project, and proposed bike paths on Aquidneck Island and Block Island. Proposals to connect the South County Bike Path to URI and to the beach received “high priority” but still need route and design work.

In Providence recommended projects include a significant enhancement around the Providence train station, improvements to Route 6 lighting, Route 146 signage, and to Allens Avenue traffic signals, work on several bridges over railroad tracks, and major resurfacing projects on Smith Street and Elmwood and Woonasquatucket Avenues.

I think that those interested in alternatives to single-occupancy auto travel should appreciate RIDOT’s continued support for the pedestrian, bicycle, safe-routes-to-school, enhancement and rail transit programs.

It must be remembered that all this is tentative. Public comment is welcome now, but a formal public hearing is being scheduled for 2pm and 6:30pm on Thursday, April 26 at the DOA building. After that, decisions rest with the State Planning Council.

Information about the Transportation Improvement Program can be found here. The 2013-2016 draft is due to be posted on that page sometime this week.