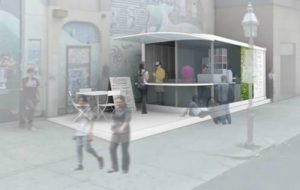 The company, which features single-cup drip coffee for $2 and a soy BLT for $5 on its menu, is leasing a 275-square-foot sidewalk space from the Massachusetts Bay Transportation Authority.

A kind of wheel-less food truck if you will. Sort of resembles the proposed café on the Providence River Pedestrian bridge.

The New York Times: Use of Public Transit Grew in 2011, Report Indicates

In another indication that more people are getting back to work, Americans took 200 million more rides last year on subways, commuter trains, light-rail systems and public buses than they did the year before, according to a new report by a leading transit association.

Americans took 10.4 billion rides on public transportation in 2011 – a billion more than they took in 2000, and the second most since 1957, according to a report being released Monday by the American Public Transportation Association, a nonprofit organization that represents transit systems.

The Urbanophile: The Sorry State of American Transport

The worst example of this I know is in Providence, where Amtrak monopolizes the four ticket windows. If you want to buy an MBTA T ticket, you have to go to a café next door. This tiny little coffee shop found a way to sell both pastries and train tickets (albeit from separate registers), so why can’t Amtrak figure out how to sell two kinds of tickets?

“President Obama challenged us to build an economy that works for everyone, and the tremendous demand for more transit service across America shows how much communities want alternative ways to get to work, school, medical appointments and elsewhere,” said Secretary LaHood. “We have critical transportation work that needs to be done and Americans who are ready to do the work.”

NEED A HANDLE ON AMENDMENTS? We’re here to help: Now that the Senate has dispensed with many of the nongermane amendments to the chamber’s two-year, $109 billion transportation bill, we move onto offerings related to transportation. Nearly all of them need only a simple majority | meaning that Dems can steamroll on votes if they so choose or that GOP amendments will only need to peel off a few Democrats to pass.