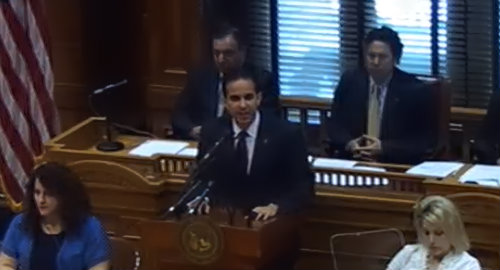 
PROVIDENCE, RI – Delivering an address that outlined his proposed budget for next year to the City Council, Providence Mayor Angel Taveras today presented his progressive vision for moving Providence beyond its fiscal crisis to focus on jobs, economic growth, public education and public safety. The Mayor also called on the City Council to enact legislation reforming Providence’s unsustainable pension system and reiterated his call for all of Providence’s seven large tax-exempt institutions to contribute more to the city.

“This budget shows our city successfully pulling back from the brink and positioning for a new era of growth and prosperity,” Mayor Taveras said during his 23-minute address. “But let me be clear: this budget counts on our ability to finish the difficult work of structural reform. It once again relies on increased support from all of Providence’s large tax-exempt institutions. And it rests on the conviction that Providence must finally fix its broken pension system in the days and weeks ahead.”

The FY13 budget is only possible because of the sacrifices that so many have made to save Rhode Island’s capital city and the significant accomplishments the Taveras administration has already achieved to reduce Providence’s $110 million structural budget deficit by nearly $90 million.

In the past year, Mayor Taveras cut his own pay 10 percent, cut the Mayor’s office budget by nearly 10 percent and refused his elected official pension.

The Taveras administration negotiated new labor agreements with Providence’s municipal workers, police, firefighters and teachers that save the city millions, cut spending in nearly every department, took the difficult action of closing schools, and reduced the city’s workforce by about 200 employees. Last year the city was also forced to impose a significant tax increase to reduce the deficit.

Holding the line on spending and replenishing reserves

City spending is lower in next year’s budget than in the current year, but the budget line item for city expenses increases $4.8 million (1.58%) because of $7.7 million committed in FY13 to begin replenishing the city’s reserve accounts.

Growing the tax base without again raising taxes

Earlier this year, the City Council passed an ordinance requiring homeowners to register their cars at their home address in order to receive the city’s 50 percent owner-occupied homestead exemption. As a result of this ordinance, fewer homes are receiving the owner-occupied homestead exemption and the city has seen an increase in the number of vehicles registered in Providence.

All told, because of this expansion of Providence’s tax base, the FY13 budget projects an additional $4.8 million in new tax revenue (1.42%) over 2012.

“I know that taxpayers are carrying an almost unbearable burden and I do not want to add to it, especially when so many are struggling to find a job,” said Mayor Taveras.


The FY13 $328.3 million school budget includes an of $19.7 million over FY12 due to increased federal funding and continued implementation of the state’s school funding formula, including acceleration of that aid as proposed by Governor Lincoln Chafee in his budget.

The FY13 budget reduces expenses in the Police Department and other public safety divisions – a direct result of new labor contracts and the expected landmark reform of the city’s pension system.

Call for pension reform and increased contributions from large tax-exempts

The budget assumes the full savings from the Providence Pension Protection Plan recommended last week by the City Council Subcommittee on Pension Sustainability, including almost $19 million from the suspension of unaffordable guaranteed annual raises (COLAs) that retirees currently receive.

At the same time, Providence’s large tax-exempt institutions cannot be successful in a failing city and must be part of the solution to Providence’s fiscal emergency. The FY13 budget includes approximately $7 million in additional contributions that Mayor Taveras has been seeking from the city’s seven large tax-exempts. To date, Johnson & Wales University is the only one of these institutions to share in the sacrifice by agreeing earlier this year to at least triple its contributions to the city over the next 10 years.

Mayor Taveras said he believes his administration will reach agreements in the coming months with most of the remaining large tax-exempts. But if not, Providence will look to the General Assembly to pass legislation that enables cities and towns to collect a fee from tax-exempts for the critical services they receive, and to follow existing laws in Massachusetts and Connecticut that require tax-exempts to pay taxes on property that is not being used directly for their tax-exempt purpose.