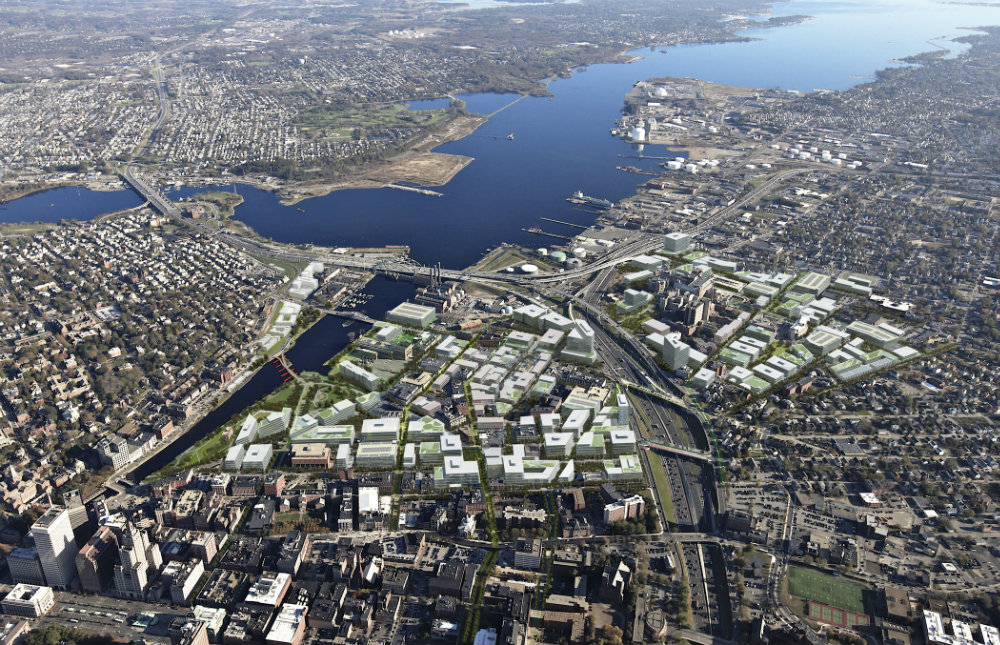 Jewelry District and 195 Land Built Out.

Press release from the Mayor’s office:

The new zoning regulations will be implemented by both the city and the I-195 Redevelopment District Commission charged with overseeing development of 22 acres of land made available in the heart of Rhode Island’s capital city into a thriving Knowledge District of academic and health care institutions, research and development companies, residences and other uses, linked together by a network of open space.

“The relocation of I-195 and new development downtown is an incredible opportunity for Providence to attract new businesses, open up new revenue-generating property, and build a stronger economy in Providence and Rhode Island,” said Mayor Taveras. “Providence’s new zoning plan clears red tape and gives developers and business owners a more predictable path forward as we work with our academic and health care institutions and our partners at the State House to grow Providence’s Knowledge District into a 21st century economic engine.”

Guiding principles behind the planning effort included linking together areas of the city that were separated when I-195 was built in the late 1950s, reconnecting neighborhoods to the waterfront and opening up waterfront development opportunities in Fox Point, developing new open spaces, creating an animated pedestrian environment, preserving Providence’s historic urban fabric, and growing the state’s knowledge economy.

The zoning improves on existing regulations in many ways:

Providence Department of Planning and Development led the process to develop the new zoning regulations, along with international planning and design consultant Perkins + Will. Mayor Taveras appointed two committees of more than 30 civic, government and business leaders to advise the city on drafting new planning and zoning regulations. The committees were chaired by Laurie White, president of the Greater Providence Chamber of Commerce, and John Sinnott, district manager of Gilbane Building Co. The effort was funded by a federal appropriation from the U.S. Small Business Administration secured by Rhode Island’s Congressional delegation.

“Through a productive collaboration among the City Council, the Mayor, the Department of Planning and Development, and city and state stakeholders, we have approved innovative zoning that will advance Providence’s Knowledge Economy,” said City Councilman Seth Yurdin, chairman of the Ordinances Committee that considered and approved the zoning changes. “Downtown, the Jewelry District and the I-195 parcels will be governed by this new zoning, which streamlines the process for new development – encouraging private and institutional investment – and protects the historic, urban core of our city.”

Through an extraordinary collaboration of city staff, committee members, City Council leadership, the City Plan Commission, and participating organizations including the Providence Preservation Society, the Providence Foundation, and the Jewelry District Neighborhood Association, the zoning was adopted almost two months ahead of schedule.

“Having a transparent, understandable and efficient zoning ordinance is critical to encourage investment in our capital city, and especially the development of the Knowledge District,” said Laurie White, president of the Greater Providence Chamber of Commerce. “We applaud the City and the Planning Department for taking the necessary step to modernize and streamline the permitting and zoning process. Having this new system in place will better position us as a community to meet the attraction, investment and sustainability needs required to be competitive and grow the jobs base.”

“This is an exciting next step for the City of Providence and an important step in the economic development of the Knowledge District. It has brought the major stakeholders together for the future growth of our Capital City,” said John Sinnott, district manager of Gilbane Building Co.

[alert type=”warning”]Full Disclosure: I was a member of the rezoning committee.[/alert]