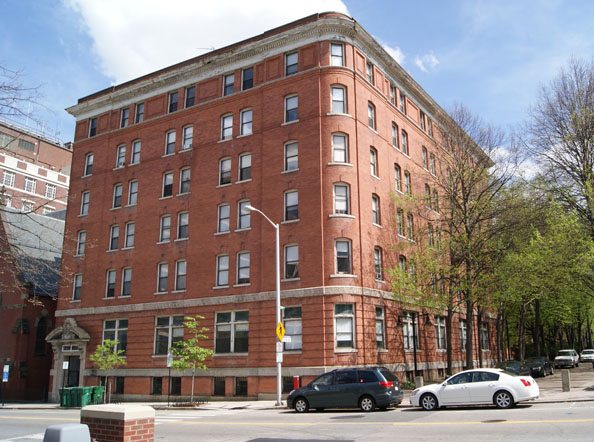 The 1905 Young Women’s Christian Association building and the 1872 First Universalist Church, both on Washington Street near Green Street have been added to the National Register.

Omni Development is working with the Providence Revolving Fund to renovate the Young Women’s Christian Association building into 59 units of affordable housing. The building, known today as the 1890 House, currently contains 52 units of elderly housing. 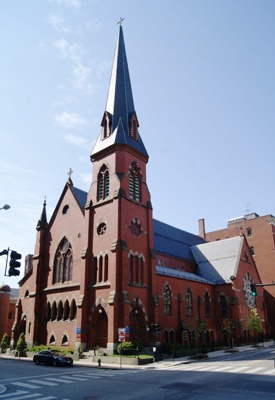 Two buildings in the amended Downtown Providence Historic District have received federal recognition for their contributions to the history of architecture and social history. Edward F. Sanderson, Executive Director of the Rhode Island Historical Preservation & Heritage Commission, announced that the National Park Service extended the boundaries of Downtown Providence Historic District west on Washington Street to include the Young Women’s Christian Association building (1905-06) and the First Universalist Church (1872). The National Register is the Federal Government’s official list of properties throughout the United States whose historical and architectural significance makes them worthy of preservation.

Originally listed on the National Register in 1984, the Downtown Providence Historic District is bounded on the east by the Providence River, on the south by Interstate Highway 195, on the west by Interstate Highway 95, and on the north by Memorial Boulevard. The district is a densely built area dominated by commercial and institutional structures that chronicle the history of architecture from Federal buildings of the early 19th century through the many commercial types and styles of the 19th and 20th centuries. The district’s dozens of buildings, parks, and works of public art are significant to the history of commerce, landscape architecture, politics and government, religion, sculpture, transportation, and theater. Moreover, the growth of the area and its building patterns reflect the civic, commercial, and cultural development of a major central business district.

The district’s boundaries have been extended to include two additional properties on Washington Street. The first is the First Universalist Church at 250 Washington Street designed by Edwin O. Howland from designs by New York architect Henry Hudson Holly and erected in 1872. It is a High Victorian Gothic church built of brick and stone with a tower and spire on its northeast corner. The building is simply articulated, with vestigial buttresses and pointed-arch windows with voussoirs of brown and tan stone. Although the building has an asymmetrical and varied exterior appearance, the interior has the traditional ground plan of a nave with projecting transepts and a shallow chancel. The handsome auditorium has dark wainscoting, clustered colonnettes with foliate capitals, Eastlake-inspired furnishings, and fine stained glass windows from Henry Sharp of New York.

The First Universalist Society of Providence, founded in 1821, was previously located at the corner of Westminster and Union streets. When the church was built at the corner of Greene and Washington streets, the Weybosset Hill neighborhood was still a residential district. The profit that the Society made from selling their old church property enabled them to build a new edifice of considerable architectural quality. The Society maintains an active congregation in their Washington Street church.

The Young Women’s Christian Association was built in 1905-06 to designs by architects Hoppin & Ely. Located at 254 Washington Street, it is a six-story, steel-frame building clad in brick and stone, with an ornate pedimented front entrance and a bold, decorative cornice. The structure housed YWCA activities until it was sold and converted into 52 units of housing for the elderly in the mid-1970s. Though not lavishly detailed, it features a round corner, a rusticated first story bounded by a granite watertable and a beltcourse, and raised panels between the windows on the top story.

The Providence branch of the Women’s Christian Association, later the Young Women’s Christian Association (YWCA), was organized in 1867, within a decade of the country’s first branches in New York and Boston. Dedicated to the welfare of single women—primarily students, teachers, shop clerks, and factory workers—who were becoming a major part of the city’s population, the YWCA established a boarding house at 66 Fountain Street in 1873. The city’s continued expansion led the YWCA to build a new larger facility in the western part of the downtown. The construction of the new building, which began in 1905, was made possible through community pledges; the organization was long able to rely on the support of city business leaders whose wives served on its board. Completed in 1906, the building housed YWCA offices, a clubroom, and residential facilities. In 1971, Midland Housing Specialists acquired the building and converted it to elderly apartments, a use which continues today, under the name of the 1890 House. Omni Development is working with the Providence Revolving Fund to renovate the historic building for 59 affordable apartments.

The amendment to the Downtown Providence Historic District was prepared by preservation consultant Edward Connors. According to Sanderson of the Rhode Island Historical Preservation & Heritage Commission, “The buildings of the Downtown Providence Historic District continue to illuminate the City’s history, and historic rehabilitation projects like the former YWCA are contributing to Providence’s future.”

In addition to honoring a property for its contribution to local, state, or national history, listing on the National Register provides additional benefits. It results in special consideration during the planning of Federal or federally assisted projects and makes properties eligible for Federal and Rhode Island tax benefits for historic rehabilitation projects. Owners of private property listed on the National Register are free to maintain, manage, or dispose of their property as they choose. As the state office for historic preservation, the Historical Preservation & Heritage Commission is responsible for reviewing and submitting Rhode Island nominations to the National Register.