The gist of the program is next month, all households are set to receive a new grey bin which will now be used for trash. The current green bins will be retrofitted with a blue lid and will now be your super duper single stream recycling bin.

Here’s all the details from the City:

‘Big Green Can’ barrels currently used for trash will now be used for recycling; larger barrel aims to increase recycling rates by making it easier to recycle. 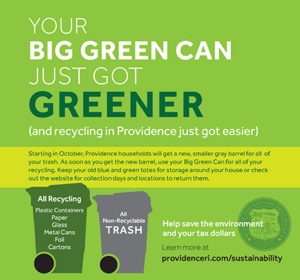 Providence’s Big Green Can is about to get greener and recycling is getting a lot easier in the capital city.

Starting October 1 and continuing through the end of the year, every Providence household will receive a new, 65-gallon gray trash barrel. As soon as a gray can is delivered to a household, its large, 95-gallon ‘Big Green Can’ barrel currently used for trash will be used for recycling. Waste Management will replace the lids on the Big Green Cans with a bright blue lid and graphic instructions on the new recycling procedure.

The larger recycling barrel, coupled with the statewide transition to single-stream recycling, aims to increase recycling rates by making it easier for all residents to recycle.

“I am excited to launch this recycling program and make a new, stronger commitment to sustainability in Providence,” said Mayor Angel Taveras. “Cities that have implemented similar programs have seen increases in their recycling rate. That is great for the environment, and it is also great for our bottom line. It has never been easier to recycle and together, we are building more sustainable, greener future for our capital city.”

Residents should begin using their Big Green Can for all recyclables as soon as they get their new gray barrel for other trash. Recyclables don’t need to be sorted – simply put all plastics, paper, glass, metal cans and foil together in the Big Green Can.

“I am thrilled about the city’s new recycling program,” said Amelia Rose, chairwoman of the Providence Environmental Sustainability Task Force. “The new recycling barrel makes it easier and more efficient for Providence residents to recycle, and keeps litter off the streets thanks to its handy lid. It’s a great investment for our city too, since by recycling more we’ll be spending fewer tax dollars at the landfill.”

The city will maintain a “no bin, no barrel” policy for all garbage and recyclables collection: Residents who do not put their Big Green Can out on the curb on their collection day run the risk of not having their other trash picked up.

Recyclables put on the curb in the green and blue totes currently used for recycling will also not be collected. Waste Management is transitioning to an automated system and will not collect recycling in the green and blue totes. Residents can keep their old blue and green totes for storage around the house, or return them to the city during tote collection days (information about collection days will be posted at www.ProvidenceRI.com/sustainability).

“Waste Management is thrilled to partner with Providence to improve the city’s recycling program, and we are excited to introduce our new cleaner and quieter collection vehicles that will be powered by compressed natural gas,” said Jim Nocella, public sector manager for Waste Management, Inc.

Recycling more will not only help keep Providence clean and green; it will also save the city money. For every ton of recyclables residents put into their new Green Cans, the city saves $32. Last year, the City of Providence recycled almost 10,000 tons of material, savings $320,000. Bringing the city’s recycling rate to 25 percent next year would save Providence an additional $250,000.

“Providence is making a big leap forward in its efforts to increase recycling and reduce trash. By providing city residents with ample room to recycle, Providence will make good on its promise to bring sustainability to every neighborhood. Residents can feel good that they’re doing their part to keep Providence clean and green,” said Sarah Kite, director of Recycling Services for Rhode Island Resource Recovery Corporation.

On Monday, September 24, the city launched a multimedia public education campaign – “Your Big Green Can Just Got Greener” – to raise awareness of the new recycling program. The ad campaign includes eight weeks of bus shelter advertisements, two months of RIPTA bus ads, as many as 850 radio spots over four weeks on five local radio stations, underwriting for Rhode Island Public Radio and Latino Public Radio, print and web ads in local newspapers, and direct mail to all Providence households. The public education campaign is funded with federal money through the Energy Efficiency and Conservation Block Grant managed by the U.S. Department of Energy.

Recycling and trash collection in Providence resumes tomorrow, however the schedule has been modified as follows:

The goal of single-stream recycling is to dramatically increase the volume of recycable items collected, thereby extending the life of the state landfill. The new sorting machines can bundle a variety of plastics, such...

Photo (cc) Scott Ableman ProJo reports today on a new recycling effort for the city of Providence. Starting Nov. 2, any resident who doesn’t separate paper, glass and cans will not have their trash picked up...