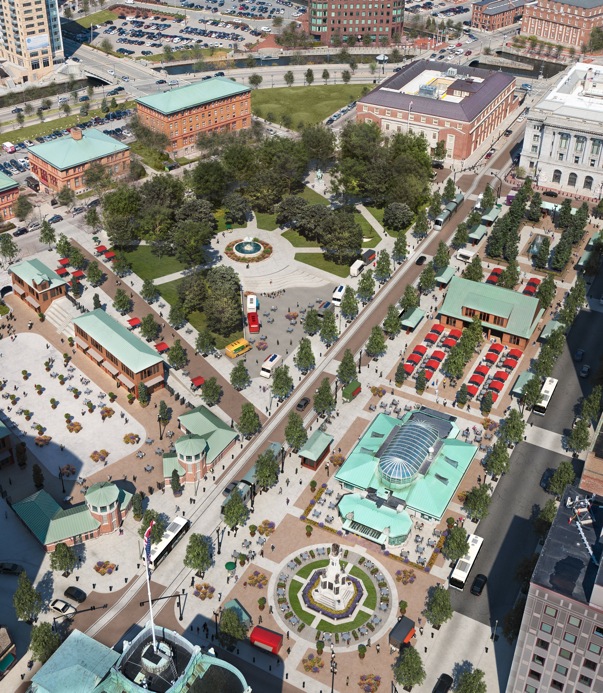 Stakeholders in the downtown area including the City, the Parks Department, RIPTA, area businesses and universities, and others have been working on reimagining the plaza for the last 6 years. Over the past 12 months, through an “Our Towns” grant from the NEA, Union Studio Architects has led the process of finalizing that vision.

Among other improvements to be unveiled this evening, the plan calls for improving the bus operations at the heart of the plaza, Kennedy Plaza proper if you will. Through their on-going Comprehensive Operational Analysis, RIPTA has determined that schedule improvements will allow them to reduce the number of berths to 10. These 10 berths can be relocated to the edges of the plaza along Washington and Fulton Streets, allowing the bus-only lanes in the middle of the plaza to be filled in and turned to other public uses. Amy Pettine, RIPTA’s director of planning and marketing told The Providence Journal, “It will be a better experience for riders and a better environment.”

Improvements throughout the Greater Kennedy Plaza area (Biltmore Park, the Skating Center, Burnside Park, and the area from City Hall to the Court House) which will be fully released to the public tomorrow, include better integrating the Skating Center to the wider area allowing for better off-season (summer) use, raised roadways allowing for better pedestrian connectivity throughout the plaza and calming automobile traffic, and a Civic Plaza that DPPC Executive Director Cliff Wood calls a “front porch for City Hall.”

Reconfiguration of the bus stops and improvements infront of City Hall may be completed in 2014. Federal money the City has for roadway improvements would go toward this initial phase. This money is from the Circulator Project, which will be reconfiguring roadways between LaSalle and Emmet Squares this year. Wood told the Providence Journal that the entire project may cost as much as $20 million and depending on fundraising, could take 4 years to realize.

[alert type=”warning”]Full Disclosure: I am a member of the Downtown Providence Parks Conservancy Board.[/alert]

This video rendering shows what the vision for Greater Kennedy Plaza could look like as you move through it.

A number of people have been working on this for some time, I’ve been to a few charrettes and meetings, and the vision is pretty exciting, take a look at the videos and express what you think in the comments:...