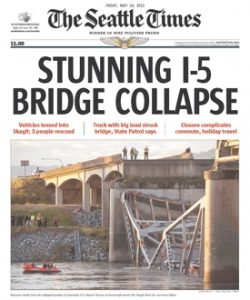 A chunk of Interstate 5 collapsed into the Skagit River near Mount Vernon on Thursday evening, dumping two vehicles into the icy waters and creating a gaping hole in Washington state’s major north-south artery.

Rescuers pulled three people with minor injuries from the water after the collapse, which authorities say began when a semitruck with an oversized load struck a steel beam at around 7 p.m.

That caused a massive piece of the northern side of the bridge to wobble, and then fall into the water, taking with it a gold pickup, its travel trailer and an orange SUV.

But actually, our infrastructure crisis is a myth…

Bloomberg: The Myth of the Falling Bridge

Maybe it’s going too far to say, “The U.S. is doing just fine, thank you very much.” The nation would benefit from reordering its infrastructure priorities — away from new highways, for example, where we are already overbuilt and usage is falling for the first extended period on record. And we’d do well to take advantage of low interest rates and idle construction resources to knock out all of our future infrastructure needs.

But the idea that the U.S. has an infrastructure crisis? No. A broad, permanent increase in spending is unwarranted.

On Thursday, the Diocese of Providence released a statement:

“Father Colello is a dedicated priest who continues to provide great service for the Church. Nonetheless, he is accused of making a serious mistake and violating the law, an offense for which he will be held responsible.[…]”

Drinking too much and getting into your car and speeding down the highway is not a mistake.

Charlotte Mayor Anthony Foxx’s Senate hearing was, by all accounts, the one “oasis of calm” on an otherwise stormy Capitol Hill yesterday. There were no sharp exchanges, no tense moments, not even any particularly tough questions. Two weeks from today, we’ll probably be calling him “Mister Secretary.”

Cabinet nominees often spend all their time on the witness stand at these hearings dodging questions, saying they’ll “look into that and get back to you.” But Foxx gave some real answers. He was well-informed and confident, and when senators asked him how he would handle thorny issues like funding constraints and modal silos, Foxx reassured them that he had ably handled the same issues as mayor.