Offering an Up Close and Exclusive Look at the City’s Newest Developments, including the Arcade Providence and Providence G 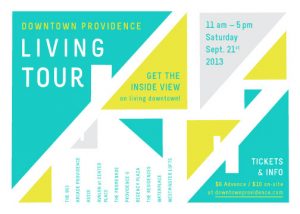 Get the inside view on downtown living! On Saturday, September 21st from 11 AM to 5 PM, The Providence Foundation and Downtown Providence Improvement District will host a Downtown Providence Living Tour showcasing downtown’s transformation into a desirable mixed-use district. Ranked by the real estate website Walk Score® as the most walkable neighborhood in the city and described as a “Walker’s Paradise,” downtown Providence offers residents access to restaurants, shops, cultural offerings, transportation options, and other amenities within a few blocks. The tour will feature nine properties in the downtown core, including The 903, Arcade Providence, Avalon at Center Place, The Promenade, Providence G, Regency Plaza, The Residences, Waterplace, and Westminster Lofts. The tour is self-guided, and people are encouraged to walk or bike from place to place, although shuttle service will also be provided.

Tour organizer Joelle Kanter, program manager for The Providence Foundation, says, “Whether people are considering a move into downtown Providence, or they simply want to preview city’s latest developments, we invite everyone to see how the neighborhood has noticeably evolved since our last tour in 2010.” In 2011 and 2012, 35 new retail businesses opened downtown, and this year, 10 have already opened. The quality and breadth of offerings are steadily improving, with new additions including popular eateries such as birch, Figidini, and UMelt.

The tour celebrates downtown Providence’s significant residential growth, reflecting national trends favoring urban living. Between 2000 and 2010, the U.S. Census shows 70.6% growth in downtown Providence residents from 2,678 to 4,569. This trend is expected to continue with demand for downtown units at an all-time high, particularly among young professionals and empty nesters. According to Lindsey Hahn, property manager at the Westminster Lofts, “The 196 apartments in our five buildings have remained 98-100% leased throughout 2013. The traffic has been steady, and people are begging us to start a wait list! During the tour, we look forward to showing off our residential units to a new audience and inviting them to visit our commercial spaces, including the 4 new eateries in the Biltmore Garage.” This sentiment is echoed by other property managers involved in the tour.

The Downtown Providence Living Tour is sponsored by The Providence Foundation, the Providence Downtown Improvement District, and participating properties, with additional support from the Civic Center Parking Garage, The Rhode Guide, Washington Trust and Downcity Parking. Buy advance tickets for $6 at downtownprovidence.com or purchase them on-site during the tour for $10 at the registration center, AS220, 115 Empire Street. All tour-goers must check in at the AS220 registration center before visiting other properties.