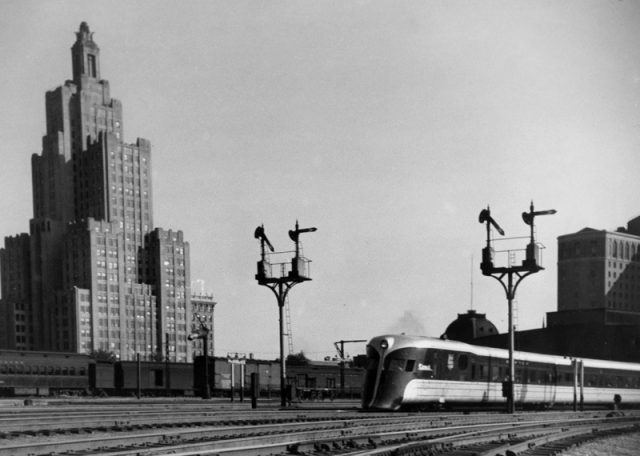 Here is a chance to give your opinion on any railroad related issue in Rhode Island. In response to Federal incentives, RI is developing a State Rail Plan for both passenger and freight services. A draft is available on-line at Planning.ri.gov. There will be public hearings on this draft on Thursday, January 23 at 10am and 6:30pm at the Department of Administration Building in Providence.

The draft plan starts with state railroad history, explains the process for developing the plan, notes related Federal programs and previous studies, and inventories the existing situation. The plan goes on to identify various desirable goals related to safety, security, infrastructure condition, reliability, service levels, coordination with other agencies, economic activity, congestion reduction, environment, and financial feasibility, but perhaps the heart of it is with Chapter 10 “Rhode Island Rail Investment Program” which suggests implementation plans over a 20 year timeframe.

On the rail freight side, the plan notes tonnage almost doubling since 2001, an increase due in part to the investment already made in the Freight Rail Improvement Project that built and upgraded tracks and increased clearances. Further improvements desired include more rail car storage space and a better turnout track from the main line in Quonset, a loop track at the Providence port, safety improvements to allow freight trains to go through Providence Station when passengers are on the platforms, projects that will cost at least $12 million. Long term there is a need to replace at least 5 rail bridges in Massachusetts. There may also be a need for a third track on the 2-track section of the Amtrak northeast corridor north of Kingston where capacity is limited due to the increasing needs of intercity, commuter, and freight rail.

Abandoned freight lines that can be considered for bike/greenway trails were identified, including the Pawtuxet Valley Hope branch, the Seaview line (Narragansett), in the Wickford area, and the Pontiac Secondary (Cranston-Warwick.)

On the rail passenger side, it notes Amtrak riders using Rhode Island train stations a year are up 65% since 2003. 510,000 riders/year use Providence Station for MBTA commuter trains, up from less than 200,000 in 2003. Another 71,000 used the new commuter stations in Wickford Jct and TF Green last year. Improvements at Providence Station and Kingston are underway but there is a long wish list for other projects.

These generally first require studies or preliminary engineering. With high priority suggested, these include further Providence Station improvements, the third track, an Amtrak stop in Warwick, the Providence “streetcar,” and higher vertical clearances on the lines between our ports and the national freight rail network.

Actually recommended for construction: improvements to the Pawtucket MBTA layover facility, to the tracks at our ports, and some East Bay rail crossings. Also on the wish list with low priority: passenger service to the Blackstone Valley and on Aquidneck Island.

In my judgment, too little attention was given to electrification of MBTA commuter service, infill stations other than Pawtucket and extension of commuter rail southward, coordination of Amtrak-MBTA-RIPTA fare cards into a version of the EZ Pass, and any vision of a streetcar network beyond the 2 mile “core connector” starter line. There were some very modest performance goals, for example calling for only a 1% annual increase in commuter ridership.

Any serious rail improvement with their economic and environmental benefits will depend on funding availability, prospects for which I think are dimming as with the rise of the tea-party types, emphasis shifts to deficit reduction and personal spending rather than community investment. Railroading, and Amtrak in particular, with its highly unionized work-force and energy efficiency potential, can be a special target of these right-wing groups.