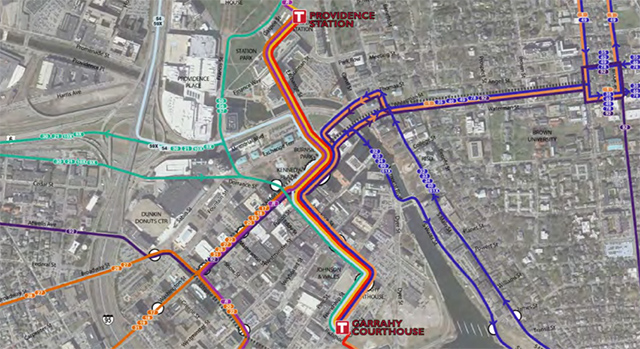 As RIPTA prepares to introduce its new R-Line rapid bus service next month, and reroute some buses in September based on the recent Comprehensive Operational Analysis, the agency is also planning for how to operate in Downtown Providence in the future.

Ideas for the future include physical improvements to Kennedy Plaza and the creation of two new bus hubs, one at Providence Train Station, the other behind the Garrahy Courthouse off Dorrance Street.

Information from RIPTA on the recent studies they have undertaken:

RIPTA has commissioned several recent studies to seek ways to improve the transit experience for Rhode Islanders. Rising ridership and the need to provide service that best meets demand in our state has driven recent evaluations of RIPTA’s operations, including the Comprehensive Operational Analysis (COA). As almost all RIPTA routes access Kennedy Plaza, it is expected that operations at this location would be more closely studied. RIPTA, in partnership with the RI Department of Transportation and RI Statewide Planning, is conducting a downtown transit improvement study, Downtown Transit 2.0, to evaluate whether the introduction of additional downtown Providence transit stations could improve service for existing riders, enhance downtown accessibility and mobility, and resolve operational and passenger experience issues at Kennedy Plaza.

When cities outgrow a single transit hub, the most common approach is to identify additional transit centers and to integrate bus operations in a manner that expands service coverage and improves overall transit service. Buses can be routed to pass through and serve more than one transit center, providing passengers with more convenient access to new locations and better distributing volumes of bus traffic. This study evaluates whether this approach could both improve transit service in downtown Providence and resolve growing operational challenges at Kennedy Plaza. New transit centers will be considered in the vicinity of the Providence Train Station and in the Jewelry District.

This study has the following primary goals: