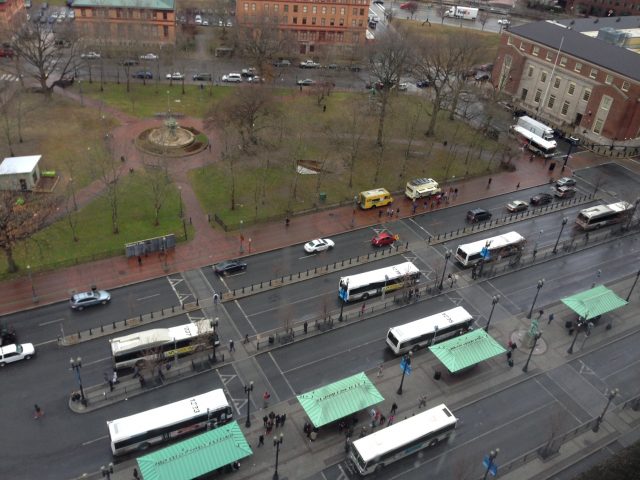 The Providence Journal: A View from Providence: Hangout or hub, Kennedy Plaza certainly is quirky

People get off buses. Others get on. Some stand in line, others stand around. They wear headphones and backpacks, some carry bags.
The plaza draws folks from all walks. Students. Workers. Homeless. Peddlers. Visitors.

The Providence Journal: Some argue that good parks and public spaces can revitalize RI economy

In Kennedy Plaza, bus and vehicle traffic compete with people wanting to use the park. There is too much hard surface; too few trees. There’s too much noise; too little to do.

“If you leave public spaces barren you get this blight,” Wood said. “You create a draw for all sorts of undesirable activity.”

Projects such as those planned at The Foundry, the Kinsley Building, and even the Industrial Trust Building at 111 Westminster (aka the Superman Building), are needed to support a strong and comprehensive economic-development strategy.

The number of Americans who biked to work in increased by 60.8 percent in 2012 (786,000 people), the largest percentage out of any other commuting style. But objectively, the percentage still seems small. One percent of workers biked to work in 2012 compared to 0.6 percent in 2000, according to the report called “Modes Less Traveled–Bicycling and Walking to Work in the United States.”

Improving or modifying sidewalks, building pedestrian-oriented commercial centers and bike lanes are all strategies for cities to accomodate more biking and walking.

The Atlantic Cities: Houston’s Plan to Get an Amazing New Bus System for No New Money

The frequent network upgrade is only part of the overhaul. The proposed system uses straighter routes and ties names to streets, which makes it more intuitive to navigate. It’s an all-day system, which means riders get the same type of service on nights and weekends that they get during rush hours. Most importantly, the system connects to job centers all around the city instead of primarily the the downtown core, which creates better access between home and work.

There will be a big celebration in downtown Providence from 7-9am, in Burnside Park, with free food, booths with community organizations, and a few special guests to applaud your bicycling efforts.