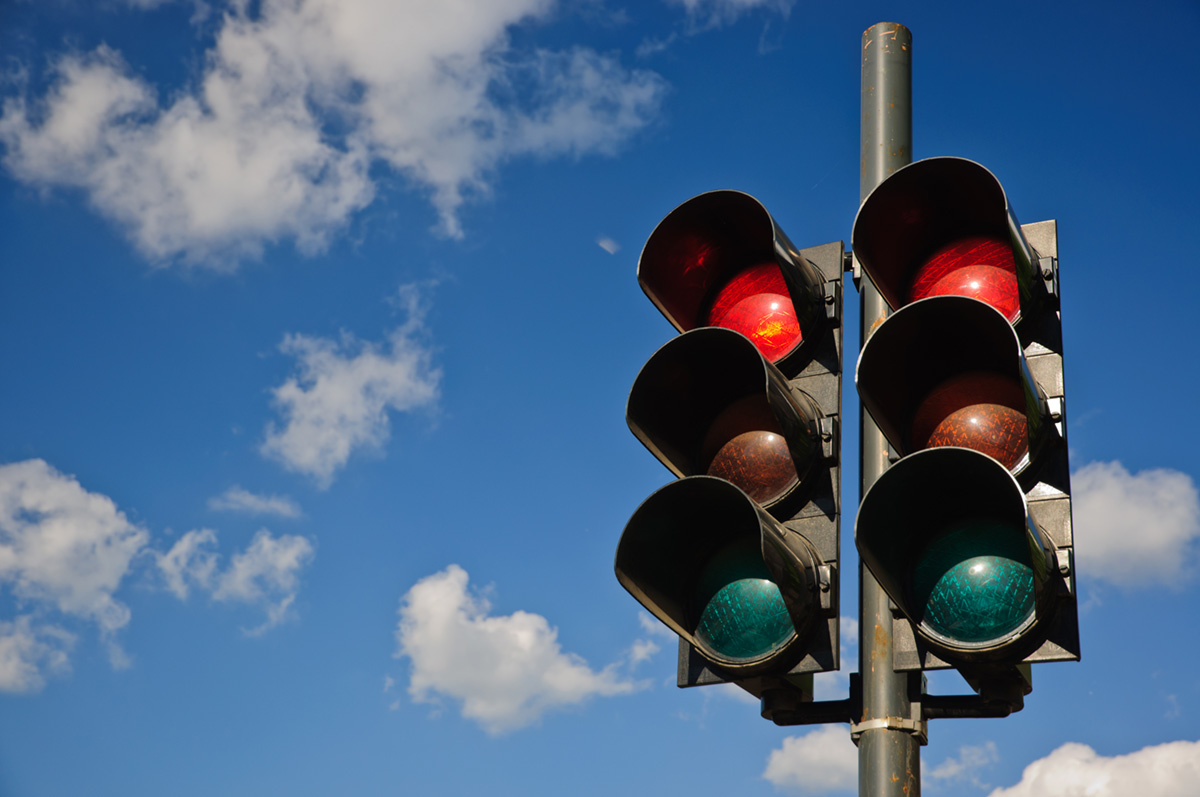 In the 1990s, the City of Philadelphia removed 800 traffic lights. Traffic flow improved and accidents declined by 26 percent in these intersections.

Recently, Wayne State researchers recommended that Detroit remove 460 signals, or 30 percent of its total inventory. And that figure may underestimate removable signals, the researchers note.

For pedestrians, four-way stops are much better—because every automobile has to come to a complete stop and traffic is calmed.

For pedestrians, removing traffic signals also helps maintain their right-of-way. If one approaches a stop light and is unable to reach the beg-button before the light changes, the red hand tells pedetrains and motorists that the pedestrian is not allowed to cross, even if they are trying to cross with the green which they should be allowed to do by right. Even if the walk-light actuates, turning drivers interpret their green as their right-of-way and treat the pedestrian as secondary.

In John Gilderbloom’s experience, the notorious streets are invariably the one-way streets. These are the streets lined with foreclosed homes and empty storefronts, the streets that look neglected and feel unsafe, the streets where you might find drug dealers at night.

“Sociologically, the way one-way streets work,” he says, “[is that] if there are two or more lanes, a person can just pull over and make a deal, while other traffic can easily pass them by.”

It’s also easier on a high-speed one-way road to keep an eye out for police or flee from the scene of a crime.

So all the streets that were made one way on Federal Hill to deter drug activity, actually made it worse? Thanks NIMBYs.

San Francisco is moving forward with a plan to add protected bike lanes on Polk Street, one of the busiest cycling corridors in the city, but the decision didn’t come easy. The San Francisco Examiner reports that the plan endured about 2.5 years of debate. At the center of the dispute was an objection to the loss of on-street parking spaces by local merchants…

But here’s the thing about the “studies on possible economic impacts” requested by retailers on Polk Street, or really wherever bike-lane plans emerge—they’ve been done. And done. And done again. And they all reach a similar conclusion: replacing on-street parking with a bike lane has little to no impact on local business, and in some cases might even increase business. While cyclists tend to spend less per shopping trip than drivers, they also tend to make more trips, pumping more total money into the local economy over time.

London Evening Standard: Pub must be rebuilt brick by brick, orders council, after developers tore it down to build flats

The owners of a historic London pub who triggered outrage by demolishing it without permission are to be ordered to rebuild it brick by brick.

Council chiefs will next week issue an unprecedented enforcement notice to the firm that owns the Carlton Tavern in Maida Vale requiring it to “recreate in facsimile the building as it stood immediately prior to its demolition”.

CityLab reposted this story from 2014 on thier Facebook page, it is still worthy of a read:

Why do they do this? Because they believe that wider lanes are safer. And in this belief, they are dead wrong. Or, to be more accurate, they are wrong, and thousands of Americans are dead.

They are wrong because of a fundamental error that underlies the practice of traffic engineering—and many other disciplines—an outright refusal to acknowledge that human behavior is impacted by its environment. This error applies to traffic planning, as state DOTs widen highways to reduce congestion, in complete ignorance of all the data proving that new lanes will be clogged by the new drivers that they invite. And it applies to safety planning, as traffic engineers, designing for the drunk who’s texting at midnight, widen our city streets so that the things that drivers might hit are further away.

Additional concepts offered by Barnes for discussion included restructuring existing taxes, implementing automatic traffic enforcement systems. or so-called red-light cameras, and creating a road usage program that charges motorists based on miles driven. In 2013, Oregon lawmakers passed the first legislation in the U.S. to create such a system, authorizing the state Department of Transportation to set up a mileage collection system for 5,000 vehicles beginning July 1, 2015.

Boston sends "tax" bills to non-profits, why traffic lights and stop signs are not the answer for safer streets, our infrastructure is too big to fail, and more in today's News & Notes.